The Toronto Star‘s Pete Howell got out his Blackberry and wrote his Ghost Rider review straight from the theatre last night. “It’s a process I call BlackBerry Spanking, although this time I actually gave more than one star,” he writes. “Ghost Rider actually gets 2-1/2 stars on account being smart enough to know it’s stupid. 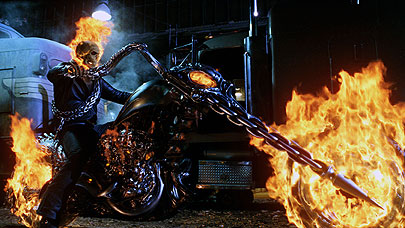 “As eternal damnation goes, it’s a toss-up for Nicolas Cage,” his review begins. “Would he rather face the razzing until Doomsday he’s going to endure for dressing up in a bear costume to play a psycho cop in last year’s The Wicker Man remake (get that Razzie Award ready!) or would he rather be Satan’s errand boy until hell freezes over?

“I’m guessing he chooses door No. 2, as seen in his new film Ghost Rider. It’s all comic book stuff. And besides, his career couldn’t possibly slide any deeper into the flames. Cage’s human character is weirder than his skeletal one. He chugs jelly beans out of a martini glass, talks to himself in the mirror and listens to The Carpenters on his home stereo

“But damned if this one shouldn’t make your so-bad-it’s-good list — especially when Wes Bentley shows up as a bad Elvis impersonator from Hell whom Ghost Rider has to send to Heartbreak Hotel. Cage has finally found a movie where it’s okay to chew the scenery — or even to set it on fire. A Ghost Rider franchise beckons. And with the lovely Eva Mendes by his side, a romantic spin-off: Beauty and the Briquette.”