There are several bootleg African Queen DVDs on Amazon, all of apparently inferior quality. (Or so I’ve read on message boards.) I don’t know who owns the right to this classic film in North America, and I don’t know if the owner has managed a restoration of any kind (which I’m told would be costly), but a first-rate, Criterion-level, beaucoup- bells-and-whistles two-disc set is obviously overdue. I’d plunk down $20 or $30 for a copy the first day. If I couldn’t wangle a freebie, I mean. 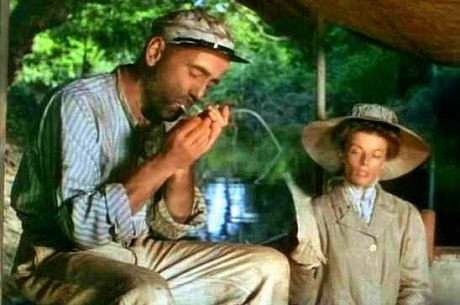 I wrote DVD Newsletter‘s Doug Pratt and here’s what he said: “I believe it is still a Fox title and I imagine restoring the source material to presentable condition is an expensive endeavor, though as a result it is one of the few remaining significant titles that is not yet available. Actually, it may not still be under Fox’s control, since it was originally one of those independent production/United Artists distribu- tion deals where the producers retained a lot of the rights. Someone holding out for the best deal, plus the daunting expense of the restoration, could also be a factor in the delay.”

What a trip it would be to see this 1951 Technicolor beauty in HD-DVD or Blu-Ray. Some of the location footage in The African Queen looks faded and grainy, like it was shot on a hand-cranked 16mm Bell and Howell, but the sound-stage stuff is almost psychedelic in its lusciousness. You could take a bath in it.

And please, when the DVD finally happens, no matting of the image. The film was shot in full-frame 1.33 to 1. It should ideally be presented in a windowbox aspect ratio (i.e., thin black bars on the sides to give the image the perfect boxy shape), which is the only true-blue way of showing pre-1952 Academy 1.33 to 1 films. 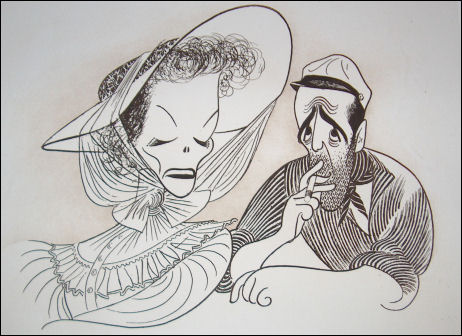