Howell on “people of size”

Speaking of Hairspray star Nikki Blonsky, National Association to Advance Fat Acceptance spokesperson Peggy Howell has told The West that “we’re delighted to see a young, beautiful woman of size have an opportunity like this. About 65 per cent of the American population is now considered overweight or obese, yet people of size are really under-represented in the media, television and movies.” 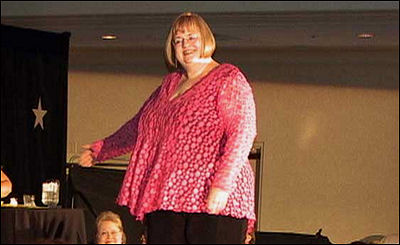 “Right now, in terms of acceptance of overweight people, it’s maybe even worse than it’s ever been,” Howell says. “There are people who identify more with anorexic and bulimic-type bodies than they do even with what would be considered a normal, average, healthy-sized body. Some people definitely show a lot of hatred toward a fat body.”
Hatred? In Powell’s case it’s more a matter of concern. Besides, why do fat-people spokespersons always make it a choice between Jabba-sized sea lions and bony wasted anorexics? What about the ample in-betweens — curvy, zaftig, rubenesque, pleasantly plump and sexy roly-poly?