“Forgive Me, Father, For I Have Scissored”

HE to Jordan Ruimy: “I’m loving the wild reactions to Paul Verhoeven‘s Benedetta, and especially Kyle Buchanan‘s reference to a Jesus Christ figurine used as a sexual tool. Man to man, Jordan, and no beating around the bush: a small sculpture of Christ is used as a dildo…right? Please tell me this is true.”

Ruimy to HE: “Yes, sir. Carved to penis size because she wanted it deep and the nun’s fingers weren’t lengthy enough.” [Note: The Telegraph‘s Tim Robey claims that the sexual tool is “a whittled statuette of the Virgin Mary.”]

Does anyone remember the rightwing Christian loon response to descriptions of Willem Dafoe‘s Jesus having sex with Barbara Hershey‘s Mary Magdelene in The Last Temptation of Christ (all of it imagined as he experiences doubt and agony as he hangs on the cross and dreams about having lived a normal life)?

I saw Last Temptation at the Century City Plitt on the day it opened (8.12.88) and when it was over we encountered a mob of devout Orange County nutters howling about religious sacrilege.

Does anyone remember how Warner Bros. refused to integrate the infamous “rape of Christ” sequence into a DVD/Bluray director’s cut of Ken Russell‘s The Devils, presumably out of fear that heartland Christians would freak out over a group of naked, sexually frenzied nuns (Vanessa Redgrave among them) using a statue of Christ to grind out orgasms?

Judging by the heated Benedetta descriptions, The Last Temptation of Christ and The Devils were mere dabblers in terms of blending representations of the Son of God with sexually perverse eroticism.

When Benedetta opens stateside your deranged righties are going to have a field day…Tucker Carlson! And the left can point to relentless rightwing sexual hypocrisy over the decades, not to mention The Eyes of Tammy Faye.

The anti-Benedetta chant will go something like “hot lesbian action defiling the image of Jesus of Nazareth…this diseased Paul Verhoeven fantasy gives us an idea of what Christianity under the left is headed for…sweaty paganism spilling sex juice over the image of our Lord and Savior…these people are beyond sick…stop them at the ballot box in ’22! This is disgusting!” 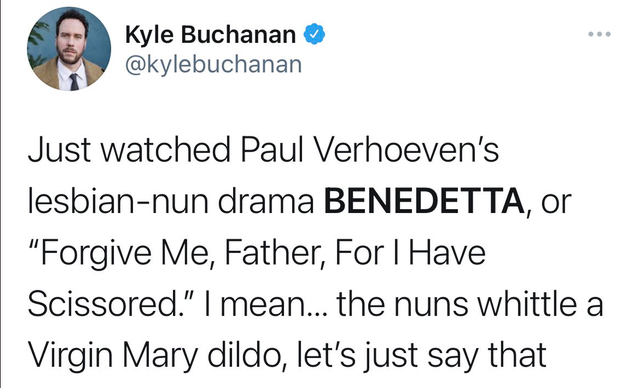 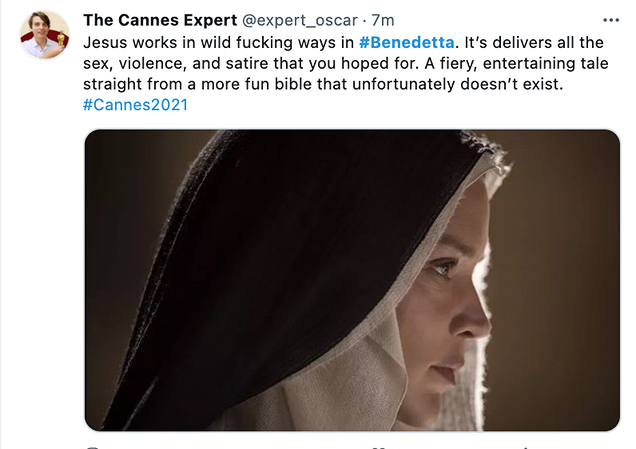 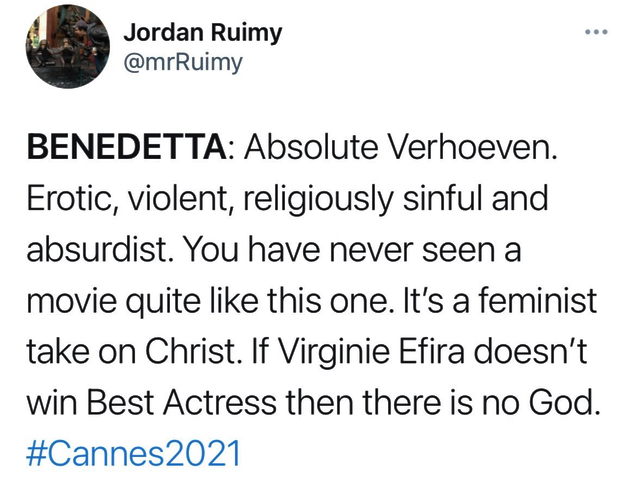 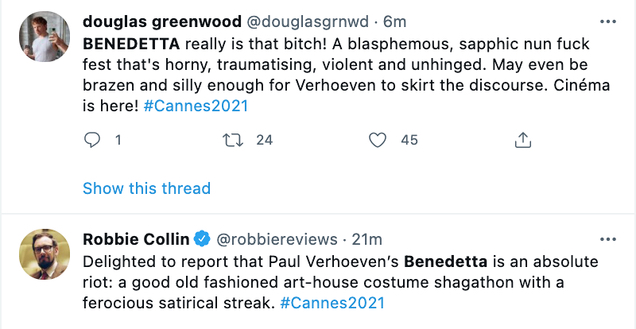