I Won't Be Here

To hear it from Matt Damon, Steven Soderbergh wasn’t just going through a temporary blue patch when he told Esquire‘s Stephen Garrett (in a piece posted in January 2009) that he intended to retire at age 51, or three years hence. Soderbergh is now 48 years old. He’ll be 51 on January 14, 2014. 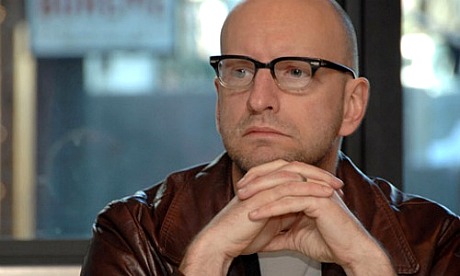 I respect what Soderbergh is saying — most people of any creative fire or ambition tend to succumb to that “I’ve really and truly had it” feeling at least once or twice — and I wish him well as a painter, if that’s what he really wants to do. But any way you look at it, retiring at age 51 is a backslide move.

Soderbergh says he’s not a storyteller and that he hates being in a profession that insists that directors do just that — tell stories, be “theatrical,” break their movies down into acts that lead to a climax, etc. I totally get that. I feel his pain. But it’s precisely Soderbergh’s dislike of and aversion to telling stories that has made many of his films — particularly The Limey and Che — so worthy and exciting. He’s succeeded at making a few of his films work according to his own terms and requirements, and in defiance of the industry’s. And in so doing he’s made it better for millions because he’s expanded the language and goaded people into realizing that you don’t have to make the same kinds of movies the same old way.

The best kind of artistic friction and payoff comes from unreasonable people balking at confinement and finding ways around the rules. Soderbergh has failed at times and at other times made rote entertainments like the Ocean’s films, but some of his movies have significantly contributed to hints of a liberation mentality over the past two decades that has made things “better” for filmmakers and filmgoers alike.

And now Soderbergh wants to come down off the cross, like Willem Dafoe did in The Last Temptation of Christ. Which is another way of saying that he more or less wants to be “happy.” Well, due respect but happiness isn’t all that it’s crocked up to be. Dafoe found that out at the end of Martin Scorsese‘s 1988 film, especially when Harvey Keitel pointed at him and said, “Traitor! You were supposed to be crucified! What are you doing here with a wife and a home and a life? Rabbi, you broke my heart.”

Mark my words that if Soderbergh does retire in three years, it’ll be a Frank Sinatra retirement — and that he’ll back two or three years later, batteries recharged, begging to be forgiven, desperately looking for another chance.

All real men understand, as Montgomery Clift once said in From Here To Eternity, that “a man should be what he can do,” and that happiness, sad to say, isn’t necessarily a payoff for each and every person who fulfills his or her potential. Happy or not, you have you do what you must and do it well, and if you come to the end of the road with a feeling of fulfillment or at least the knowledge that you gave it hell, great. But if you throw off the yoke you risk being hit with the realization at the end of the road, as Dafoe did in those traumatic last minutes of The Last Temptation of Christ, that opting for “happiness” was a terrible error.

I’m happy now but I wasn’t that happy in the ’80s and was only sporadically content in the ’90s, but the point is that I manned up and buckled down and stuck it out. Don’t think I wasn’t on the verge of bailing. If the internet hadn’t come along I might well have. But I learned one thing for sure, and that’s that God doesn’t like quitters. At all. I think Soderbergh’s spirit was gradually watered down by the Ocean’s films and then broken by negative response to Che and then by the Moneyball debacle. Those were definitely rough episodes for him. He can chill and/or disappear for a couple of years, fine, but eventually he’ll have to pick himself up and get back in the race. Ask Frank Sinatra.

The Winklevoss twins didn’t invent Facebook, and if Soderbergh really had painting in his veins he would have painted by now.