Praise God a bit more: critic David Ehrenstein confirmed on the Criterion forums a week and a half ago that Criterion will be issuing a DVD of Lindsay Anderson‘s If…., which I’m been pushing for since the turn of the century, sometime in June. If… isn’t mentioned on the Criteron Co. site, but Ehrenstein said he’s written the notes and that they’re putting it out — good enough for me. 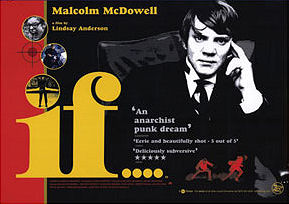 A ’60s rebellion allegory that brilliantly captures the rage and excitement of a revolution in poetic fantasy terms, If… begins as a relatively straightforward story of a few teenaged malcontents — Malcolm McDowell‘s Mick Travis being the ringleader — coping with the routine humiliations imposed upon students by the priggish staff of a military-minded British private school.

But this 1969 film (based on a script called “Crusaders,” by David Sherwin and John Howlett) gradually becomes more and more surreal, and not just in a political vein. 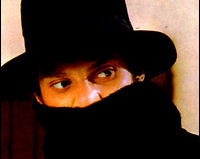 That look of fierce concentrated rage in McDowell’s eyes as he and his friends fire their automatic weapons from a rooftop at their public-school enemies….that’s the whole ’60s up-against-the-wall mania in a nutshell. Stanley Kubrick hired McDowell to portray “Alex” in A Clockwork Orange because of how thoroughly he rocked as If…‘s romantic-anarchic hero.

Was If… the first mainstream commercial drama to mix color and black-and-white footage in an impressionist vein? Something tells me another film or two did it first, but no titles are coming to mind.

Supposedly McDowell recorded a commentary about the film years ago — let’s hope it turns up on the DVD. Reader Max Evry has written than “in a perfect world [the Criterion If…disc] would include a doc pointing out the distinct influence of Jean Vigo‘s Zero For Conduct as well as one about director Lindsay Anderson. 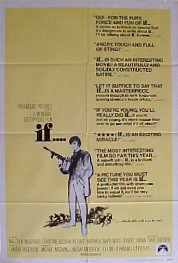