If You Can’t Rock Me

It’s obviously an excellent thing to support small local cinemas like the Regency Fairfax (as several Los Angeles demonstrators did last weekend, and like Karina Longworth did yesterday in her LA Weekly blog). But I’m no friend of the cause if projection and sound standards aren’t up to par. 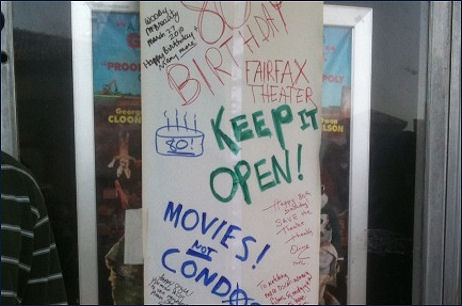 My last time at the Fairfax was seeing the director’s cut of Ridley Scott‘s Kingdom of Heaven. The projection and sound were decent but not wonderful. I knew KOH would play somewhat better when I eventually popped in the disc. I finally watched it on Bluray a few weeks ago — by far the best viewing I’ve had (or am likely to have).

This is why I’ve bought a ticket at the New Beverly maybe twice in the last fifteen or so years, and why I always hesitate before going to see a restored classic at Manhattan’s Film Forum. I know that the projection levels won’t come close to matching the image I’ll get on my 42-inch plasma, and that the sound quality will be at least 100% better on my home system. The sound at the Film Forum is close to awful a good part of the time. I was cupping my ears during a showing of Christmas in July last year.

The only decent places for ticket-buyers to see non-first-run films in Los Angeles are (a) the Academy and (b) the Egyptian American Cinematheque theatre on Hollywood Blvd, and (c) the AC’s Aero theatre on Montana Blvd. And at the two Arclights when they occasionally show oldies.