An IMAX-produced featurette is up about the decision to shoot “certain sections” of Chris Nolan‘s The Dark Knight (Warner Bros., 7.18.08) in IMAX and the challenges that went with this. 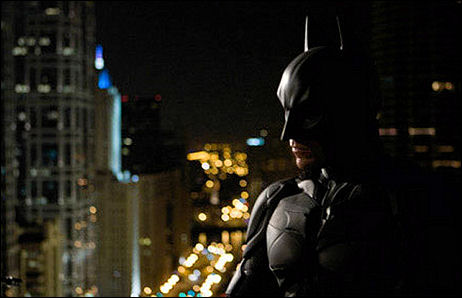 Warner Bros. publicity has invited elite and geek press to a special screening of selected portions of the IMAX Knight footage at the Universal Citywalk IMAX theatre on or about 12.5. The three talking heads are director-writer Nolan, dp Wally Pfisterand steadicam operator Bob Gorelick.

Nolan: “No one’s every done this before…shooting certain sections of the film in IMAX would give us the biggest possible canvas with which to keep telling the story.” Pfister: “IMAX has the highest resolution you could possibly achieve [but] it’s to four to five times heavier than the camera we’re used to working with, [and] the aspect ratio is taller than it is wide.” Pfister: “I’ve always been interested in shooting on IMAX. It’s really an extraordinary experienc to see an action sequence on the large IMAX screen….just knocks you out of your seat.” Nolan: “It takes you back to the world of a kid, watching a movie that’s larger than life.”