In a highly unusual and highly admiring interview piece, thorny N.Y. Times critic Manohla Dargis speaks with Hurt Locker director Kathryn Bigelow in tomorrow’s edition (i.e., Sunday). Are the Times editors telling Manohla to step outside the critics’ box and write more to beef up page views, or did she ask to interview Bigelow out of personal passion? Perhaps a little of both. 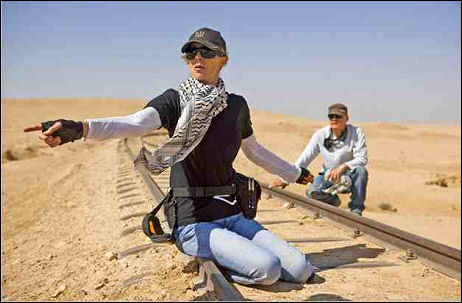 Bigelow’s film, says Dargis, was “greeted with rapturous praise and some misapprehension” after its Venice Film Festival premiere nine months ago. “Mostly, it seems, because its extraordinary filmmaking, which transmits the sickening addiction to war as well as its horrors in largely formal terms, doesn’t come wedded to a sufficiently obvious antiwar position. One British critic went so far as to say that while the film had ‘excellent acting, camerawork and editing, it could pass for propaganda.’

Except The Hurt Locker “doesn’t traffic in the armchair militarism of Hollywood products like Top Gun and Transformers,” she says, “[and] neither is it an antiwar screed. It’s diagnostic, not prescriptive: it takes an analytical if visceral look at how the experience of war can change a man, how it eats into his brain so badly he ends up hooked on it.

“And, like all seven of Ms. Bigelow’s previous feature films, this new one is also as informed by the radical aspirations of conceptual art as it is by the techniques of classical Hollywood cinema.”