Got up really early for some reason, worked a couple of hours and then went down to Norm’s on La Cienega for breakfast. A couple of good-natured beefy guys who work for a glass-installing outfit came in, and as they sat down they greeted the waitress — a 40ish black woman — and said, “So, [name]…excited? Good news, eh?” 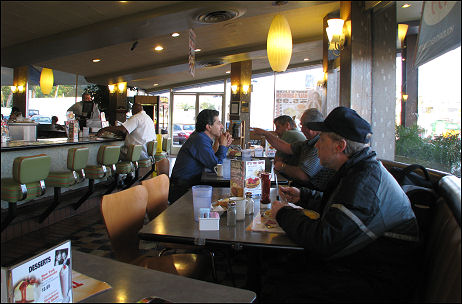 They were talking about Obama’s triumph, of course. Now, it’s entirely possible that these guys knew the waitress well enough to have sussed out her political beliefs to some extent so let’s tread carefully. Nonetheless, I took their comment to mean, “Hey, one of your people won the nomination!” I mean, they didn’t look to me like guys who read Salon…okay?
The waitress gave them a quick glance as she said “yeah, I’m excited.” She said it in a somber tone that indicated (to me anyway) that she saw them as a couple of racist lunkheads who left good tips.
And just as this happened, I was reading this 6.3 Richard Cohen column in the N.Y. Daily News. I was right in the middle of reading the first three graphs, I mean. The combination of this and the two chowderheads at Norms (a) gave me the chills and (b) put me in a down-ish mood.
Media elites don’t really understand how deeply racist this country is. Among the lugs, I mean. They really don’t. They need to hang out more at Norms, at truck stops, in working-class neighborhood taverns. If Obama wins, it’s going to be a squeaker.