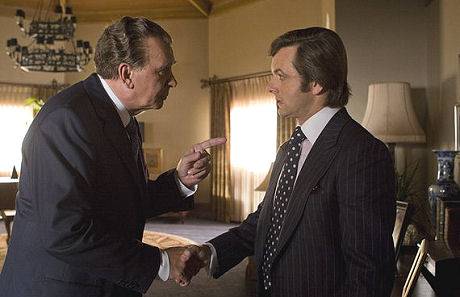 They’ll inevitably be compared. They’re similar enough to be seen as a kind of two-headed hydra. The temptation to call them a pair of political IEDs being lobbed by Hollywood liberals at John McCain‘s campaign will be considerable. The best scenario for Stone’s film, obviously, is that is will have a strong impact in this regard. The Nixon tragedy is so specific and widely accepted that Howard’s film won’t be part of the election conversation as much as W., but the two films taken together will certainly remind audiences of the Republican potential for Oval Office screw-ups and arrogance.
It seems inevitable that the fates and fortunes of the two will be seen as somehow linked or bouncing off each other before long. (Will they be seen as a twofer or an either-or?) Expect sharp retorts from the conservative talk-show hosts and bloggers as soon as W begins screening.
Party chit-chatters will tell you that both feature lead performances — Josh Brolin‘s as Bush, Frank Langella‘s as Nixon — with strong shots in the awards derby. Having read the scripts for both and seen Langella’s performance in the Frost/Nixon stage play, I can say there’s most likely merit in these assumptions.
My personal can’t-wait-for-it, however, is Richard Dreyfuss as Dick Cheney in W. The longing to see Cheney eviscerated is so strong that my feelings about Dreyfuss’s performance probably aren’t to be trusted. I need to take a pill and calm down about this.
Frost/Nixon, opening on 12.5, has been finished for some time and has been screened here and there. (A friend caught it a week or so ago.) The plan is to “screen the shit out of it” for general media starting in August, even though it won’t open for another four months. W, which went before the cameras several months after Howard’s film did and is currently being edited, will be out on 10.17.
No matter how good Frost/Nixon turns out to be (and I’ve heard that it works), it would seem that Stone’s film is in a more opportune position, release-wise, but why speculate this early in the game?