Westworld Hate Will Continue To Spread

Guys like Tsujihara aren’t paid to show depth and insight. If he doesn’t grow the Warner Bros. portfolio by expanding its power and influence, he’ll be fired. It follows that he doesn’t give a shit about how you, the betrayed and angry viewer, may feel about Westworld. He doesn’t give a hoot about the sense of a slowly building narrative enervation that has been creeping into this handsomely produced miniseries since early November or thereabouts. He probably doesn’t even know what people are talking about when they say that Westworld has simultaneously turned rancid and flaccid. 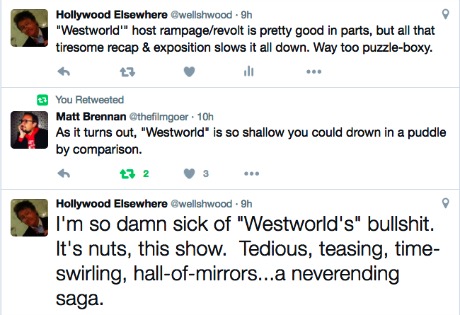 December 5, 2016by Jeffrey Wells73 Comments
« Previous post
Unrequited Love Is The Only Kind That Lasts
Next post »
Standing Rock Victory Is Glorious, But What Happens When The Bad Guys Take Over In January?