“Internal Stuff” = A Flash of Temper? Or Is Finke Going Solo? 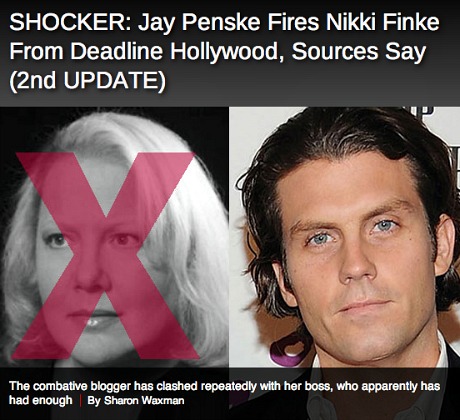 Last night L.A. Times reporters Joe Flint and Dawn Chmielewski wrote that (a) while PMC’s statement that Finke “has a multi-year contract with the company, and it is the company’s absolute intention to continue its obligations under the agreement,” Finke’s PMC contract “has a window, opening this month, that allows her to leave Deadline,” and (b) “the mercurial Finke has been telling people that she is looking to leave Deadline and go back into business for herself. While she was filing her box-office report for this weekend she told some people that it would be her last such piece for Deadline.”

Earlier: I awoke this morning in Paris to Sharon Waxman‘s Wrap story about Nikki Finke having allegedly been fired from Deadline Hollywood by owner Jay Penske. The story comes second-hand from “multiple individuals,” Waxman reports, with these sources telling Waxman that Finke “will be leaving the company as soon as this week.”

Right away my reaction was “whatever you think of Finke she created Deadline…she built it brick by brick…it’s her brand, her operation…Penske can’t cut off the head of the chicken.”

My immediate presumption was that some kind of volcanic dispute had ignited and that (I’m channelling here) Penske had asserted dominance by telling Finke “you’re fired!” but without actually meaning she’s whacked all the way around the bases and into home plate. Bosses lose their tempers like anyone else. “You’re fired!” over a weekend can mean “adjust your behavior and performance and start respecting my authority and judgments because I own the effing company…hello?…or I will give serious thought to actually canning your ass on Monday.” Or something like that.

Waxman states that Penske has emailed Waxman to say “your story isn’t true and all of the ‘facts’ that you mention are completely erroneous.” But when Waxman asked Penske “if Finke was in fact leaving Deadline, he did not respond.” Moreover, Waxman writes, “Finke did not return an email or call seeking comment.”

If Penske wanted to kill the story he would have issued an unequivocal denial along with a statement of unqualified support for Finke, right? And Finke would have emailed or called Waxman and told her she’s dead wrong and full of it and so on. But maybe Penske was on a plane and decided to deal with it later, and maybe Finke didn’t want to give Waxman the time of day.

Deadline‘s Michael Fleming has posted a piece saying that “internal stuff happens from time to time and it gets worked out, despite the sensationalized reporting that amounts to wishful thinking on the part of The Wrap.” And yet Fleming has also written that “I don’t believe [Waxman’s story] for a moment.” What does belief have to do with anything?

Penske Media’s Lauren Gillian has sent the following internal message to PMC employees: “As you may be aware, Sharon Waxman at TheWrap has just published a libelous, false, and defamatory story on her blog, in which she claims amongst other things that PMC has fired Nikki Finke from Deadline.

“This is a complete fabrication, with not an ounce of truth to it. Just to be clear, Nikki Finke has a multi-year contract with the company, and it is the company’s absolute intention to continue its obligations under the agreement.

“It is sad when a rival business feels the need to fabricate stories to create traffic and notoriety. Due to the defamatory and disparaging nature of some of the completely innaccurate statements made by Waxman, PMC has turned this matter over to our attorneys.”