In a 6.3 review, Daily Mail critic Christopher Tookey has taken a dump on Marc Forster and Brad Pitt‘s World War Z (Paramount, 6.21). And so has the Telegraph‘s Robbie Collin. In fact they’re both using the “World War Zzzzz” line so U.S. critics need to come up with something else. 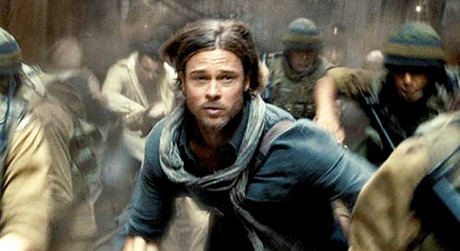 World War Z opens on the exact same day in the U.K. as it does in the States (Friday, 6.21) but British crix are lobbing their grenades now because some of them attended last night’s big premiere in London’s Leicester Square.

Occasionally Joe Popcorn will wake up and dismiss a stinker like After Earth, but for the most part he doesn’t give a hoot what guys like Tookey and Collins think. At all. So Pott and Forster and Parampount would probably be fine if World War Z hadn’t cost $200 million and change.

The film is “is most impressive in its big set-pieces,” Tookey explains. “The initial panic on the streets of Philadelphia is thrillingly done, as is the fall of Jerusalem to the zombie horde. There’s also an effective airborne sequence. [But otherwise it’s] awfully like all the epic action films made by Roland Emmerich, ranging from the nearly sublime (Independence Day) to the totally ridiculous (10,000 BC). It’s slap-bang in the middle of that quality spectrum, round about the level of Godzilla and not quite as classy as The Day the World Ended.

Pic “is horrifyingly feeble when it comes to characterisation. Pitt’s hero lacks personality. All we know is that he loves his family, but no one has given him or his relations any exceptional qualities.

“A key fault is that we never find out why the powers-that-be at the United Nations think so highly of Pitt. He’s resourceful, but he doesn’t seem particularly brave, bright or knowledgeable. It is a central weakness of the film that, without any particular expertise, he solves the mystery of how to fight the zombies before anyone else. It’s as though no one except him is paying attention. [And] it’s a tedious cliché that Pitt is torn between nurturing his cute children and rescuing the whole of mankind. No one except him is going to think that’s a tough call, but Pitt spends too much of the first hour chewing his lip over it. 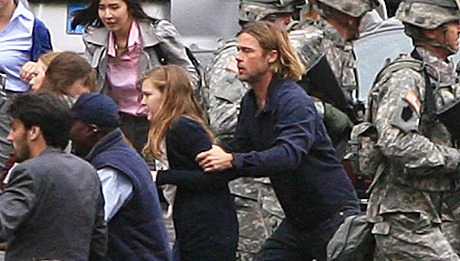 “After negative reaction [to an earlier cut] within the studio, the final 40 minutes [of World War Z] were rewritten and reshot at a [total] cost of $200 million. It’s hard to know where the money went. The long, would-be climactic sequence inside a Welsh research laboratory looks about as lavish as the average episode of Doctor Who.

“Pitt introduced the screening I attended, and promised the audience ‘the most intense film you’re going to see this summer’. He called it ‘original’ and ‘genre-bending’. If only it were.

“If you’ve read Max Brooks’ original book, published in 2006, you will know that Pitt’s character is a UN worker trying to piece together the truth from a variety of sources. Apparently, the first draft of the script, by J. Michael Straczynski, was faithful to the source material. Producer Pitt and Paramount junked that investigative structure, which might have turned into a movie along the lines of District 9, All The President’s Men or even Citizen Kane, in favour of a straightforward hero-to-the-rescue scenario.

“[The] film bears unmistakable signs of having been assembled by a Hollywood studio over-preoccupied with earning a family-friendly certificate. Virtually all the violence takes place fractionally off-screen. Disappointingly, the final product is much more conventional than the book and avoids its most interesting and innovative qualities.

“World War Z isn’t terrible. Parts are impressive and exciting. But the incredibly long distance it falls short of its source material means it must rank as one of Hollywood’s most wasted opportunities.

“There are estimates that the movie will have to gross $550 million merely to break even. Its lack of originality, ingenuity and personality means that it has virtually no chance of making back that scale of investment. Last year’s most underperforming blockbuster, John Carter, is said to have lost Disney over $200 million and resulted in regime change within the studio. If I were a senior Paramount executive, I would be afraid. Very, very afraid.”

Sidenote: Thank God that URL embed coding is now working, apparently due to nothing I can figure except that I’m back in Paris with lightning-fast wifi. Except I also had excellent wifi at my disposal in Bern and it didn’t work at all.