If you’re looking to make a left turn at a stop-light intersection that doesn’t have a special left-turn lane and there are three or four cars with the same goal in mind, you know that only three cars will make the turn. Four cars never make it — three at the most and sometimes only two.

But the only way three can get through is for car #1 to drive into the middle of the intersection with its left-signal flashing, and also for car #2 to be right behind car #1 with its nose just ahead of the foot-traffic crosswalk, and car #3 right behind #2, usually behind the crosswalk. When the light turns yellow and opposing traffic is coming to a halt is when everyone makes their move — cars #1 and #2 without breaking a sweat with car #3 barely making it through after the light has turned red. 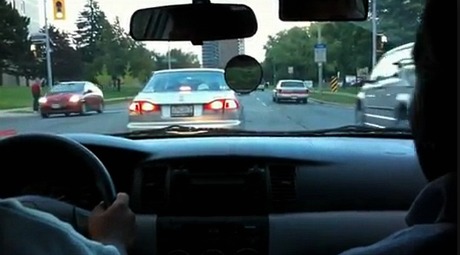 But the whole system collapses if car #1 doesn’t nudge into the center of the intersection, and this is what today’s traffic rant is about — candy-asses who are afraid to move into the middle.

There are some who will only creep two or three or four feet beyond the white line as if they’re afraid of something bad will happen, and there are others who won’t move forward at all — who just stay in the left lane with their left signal blinking. Meep meep…will you move ahead, please? Are you aware that if you hang back like a coward you’ll be condemning the third guy to wait for another light change? Show a little consideration and get out there.

Sometimes the fraidy cats will take the hint and nudge forward a little bit, but they don’t like it — it makes them feel uncomfortable to sit in the middle of an intersection, even if it guarantees a longer wait for people behind them. I have nothing but contempt for people like this.