Read Allison Hope Weiner‘s 6.2 N.Y. Times story about….well, should we pussyfoot around or should we just say it? The story was clearly inspired by intimations that Weiner (or people she’s spoken to, or both) are picking up on their insect antennae about M. Night Shyamalan and his latest film, The Happening (20th Century Fox, 6.13). 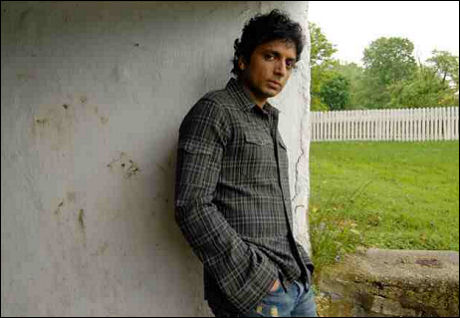 I don’t believe that Weiner and her editors would have run this story — which, if you boil the snow out, basically says “uh-oh, here comes hard-luck M. Night again!” — if uncertainty wasn’t in the air.
I’ve heard the same stuff that Weiner has about the film. Everyone knows what’s (possibly) going on. But it’s not the Times‘ way to peddle non-attributable rumblings so they run a story that reports on Shyamalan’s past troubles and suggests that perhaps…you know…his troubles may not be over. Because…whatever, his karma or his way of making movies (i.e., insisting on writing his own scripts) hasn’t worked in his favor or his relationships with Hollywood mainstreamers have soured, or because…nope, we can’t say it. The most we can do is tap-dance around it. Which is sufficient because the fumes of a story like this say it all.
Shyamalan “has not been able to undo his reputation in Hollywood as a talented filmmaker who will not play by studio rules,” Weiner writes. “After the success of The Sixth Sense, he criticized Disney executives, dared to compare his talent to Steven Spielberg√É¬¢√¢‚Äö¬¨√¢‚Äû¬¢s and Alfred Hitchcock√É¬¢√¢‚Äö¬¨√¢‚Äû¬¢s and has steadfastly asserted his reputation as an outsider by refusing to move from Philadelphia to Hollywood.
“His outsider persona continued to work for him, so long as the films The Sixth Sense, Unbreakable and Signs continued to make money. But when his films started to falter at the box office — his last movie, Lady in the Water, was drubbed by critics and ignored by moviegoers — the Hollywood establishment√É¬¢√¢‚Äö¬¨√¢‚Äû¬¢s support began to wane.
“That failure has put considerable pressure on his new film, The Happening, an R-rated horror movie for Fox that opens on June 13. Another failure would harm the Shyamalan name and make it difficult for him to keep full control over his films.”