In an 8.9 New Yorker posting, Richard Brody is urging the daring and the willing to catch Elaine May‘s Ishtar tomorrow morning on Turner Classic Movies at 4 am (i.e., about 11 hours from now). Brody calls this misunderstood 1987 calamity “one of the most original, audacious, and inventive movies — and funniest comedies — of modern times. It isn’t just a movie worth rescuing for a few choice bits; it’s a thoroughgoing, beginning-to-end masterwork.” 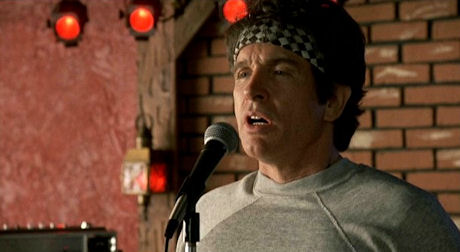 All right, now that’s just horseshit. Over-cranked, over-exuberant, not trustworthy. And yet Ishtar, on the whole, is worth seeing. Here’s how I explained it last January:

(1) “The general…well, at least marginal view that Ishtar is better than its rep and is actually hilarious in portions”; (2) “Ishtar was one of the first ‘no-laugh funny’ films ever released. That was a completely new concept back then, and people didn’t know what to make of it”; (3) “Warren Beatty and Dustin Hoffman played a pair of profoundly untalented New York-based songwriters — I remember that much clearly. I also recall that the first half hour or so played pretty well, and that the film’s troubles didn’t start until they travelled to Morocco…Ishtar, I mean. I remember that the best no-laugh humor happened when Beatty and Hoffman were compulsively composing awful songs”; (4) “Ishtar is a decent (some would say inspired) piece of entertainment, a legendary Hollywood debacle that, like Heaven’s Gate, gradually found a measure of respect. Okay, among people with a slightly corroded and perverse sense of humor but still, no one today thinks of Ishtar as a film to be shunned. I haven’t conducted a poll, but I’ll bet very few critics would put it down, and that most would probably say ‘not half bad.'”