“…It’ll Do Until The Mess Gets Here”

Donald Trump had no interest in observing any sort of moderation or decorum during Tuesday night’s debate. Because he deliberately ignored the usual way that Presidential candidates behave in these events, the debate was mainly about bullying, street-fighting, “so’s your old man” and tough-guy jawing. Not just with opponent Joe Biden but also moderator Chris Wallace, who struggled without much success to exert a semblance of control.

So with a brawl going on and Trump obviously refusing to back off, it fell to Biden to do two things — not let Trump elbow him aside with macho taunts, and at the same time try and appeal to the adults in the room with sane, sensible messaging.

I was amazed that the debate was unruly as it was, but I have to admit that I loved it when Joe snarled back. I went “yes!” and punched the air when he called Trump “this clown” and told him to “shush” and “shut up, man.” I also loved “you’re the worst President America’s ever had.” 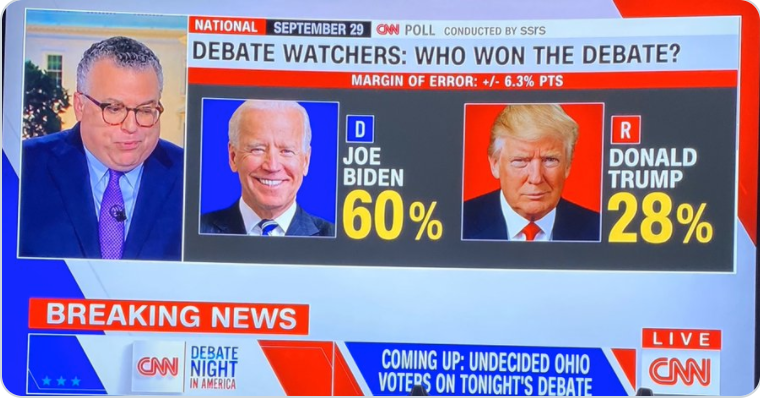 In short Joe was the calmer and more centered of the two. He was coming from a solemn, steady place. But if he hadn’t lashed out at Trump he would’ve seemed too old, too frail. (At least to some of the guys out there.) So I’m glad he punched back a few times.

To go by recent N.Y. Times reporting Trump flat-out lied when he said he paid “millions and millions” in taxes in 2016 and ’17.

Some apparently enjoyed the street-corner aspects of the debate. I heard from a friend who felt that Joe was “too soft” and obliging. Pugnacious, rude-ass Trump unfortunately set the tone. Wallace tried to rein him in but without much success.

Trump’s “Proud Boys” remark — “Stand back and stand by” — will sound hooliganish to the left and the centrists, but ugly, pot-bellied, T-shirt-wearing righties will love it. Because “stand by” was a rallying cry, as in “I’m with you, guys…keep your powder dry and the time will come.”

Wallace: “Mr. President, I am the moderator of this debate, and I would like you to let me ask my question and then you can answer it…let [Biden] answer!”

Trump reply (at one point): “I guess I’m debating you, not him, but that’s okay, I’m not surprised.”

Wallace at halfway point: “The country would be better served if we allowed both people to speak with fewer interruptions, and I’m appealing to you, sir, to do [that].”