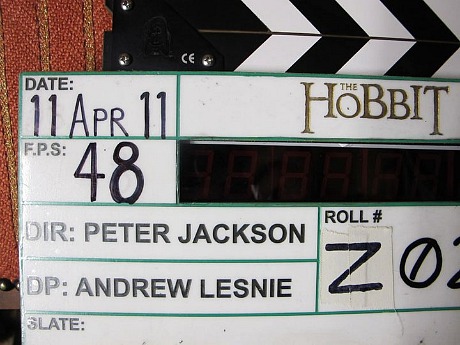 This is obviously a digital technology deal when it comes to exhibition (i.e., theatres that are still using reel-to-reel analog projection could never project at 48 fps) but what would this mean percentage-wise? How many top-tier urban theatres will likely show The Hobbit, Avatar 2 & 3 and Trumbull’s untitled latest in this format? And what about those behind-the-times houses in the boonies? Will Cameron-Trumbull-Jackson be shooting traditional 24 fps versions of their films to accomodate this sector? Because Jackson is clearly uncertain in his post about whether the 48 fps will be an exhibition reality by the time The Hobbit opens.

“We are hopeful that there will be enough theaters capable of projecting 48 fps by the time The Hobbit comes out where we can seriously explore [this] possibility with Warner Bros.,” Jackson writes. “However, while it’s predicted that there may be over 10,000 screens capable of projecting The Hobbit at 48 fps by our release date in Dec. 2012, we don’t yet know what the reality will be. It is a situation we will all be monitoring carefully. I see it as a way of future-proofing The Hobbit. Take it from me — if we do release in 48 fps, those are the cinemas you should watch the movie in. It will look terrific!”

You know what’ll be cool? When a director announces he’s using 48 fps on a modestly-scaled, dialogue-driven film that doesn’t need it. Because extra-clean visual clarity is beautiful and enjoyable in and of itself — you don’t 3D fairies and hobgoblins and hammerhead dinosaurs. I remember saying 28 years ago that a truly hip and beautiful use for Trumbull’s Showcan process (60 fps) would have been the film version of David Jones and Harold Pinter‘s Betrayal. I’ve also expressed support for Baz Luhrman‘s proposed 3D version of The Great Gatsby, precisely because it’s unnecessary.

Betrayal, by the way, is still unavailable on DVD/Bluray, possibly due to some thoughtless and/or obstinate descendant of producer Sam Spiegel, whose estate, I’ve been told, owns the rights.