The Assassination of Jesse James by the Coward Robert Ford (Warner Bros., 9.21) was shown last week to a group of elite Fifth Estate cool cats. Digitally projected, sans credits…despite the 9.21 release date only two months away. We all know by now that poor, embattled, unloved Jesse James needs all the help it can get from sympathetic journos — i.e., those with a vulnerable soft spot for a long, painterly, Terry Malick-styled western shot by Roger Deakins, no matter how it plays otherwise. 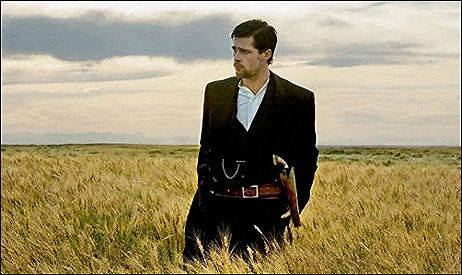 Lord knows there’s very little sense that WB distribution execs have been burning the midnight oil to promote the film. They can’t even be bothered to send out any new photos (i.e., the same four or five shots have been kicking around since last fall). The Jesse James website hasn’t changed either.
It’s funny, but I’ve heard so much about Andrew Dominik‘s much-delayed, kicked- around film that I almost feel I’ve seen the darn thing. Lots of dialogue, beautiful- ass photography, “not really a western,” much more Casey’s movie than Brad’s, etc. The version shown last week ran about two hours and 40 minutes, I’m told. In one conversation the word “attenuated” was used. The same guy said “it could be tightened” by “15 minutes,” and that the story “tends to play out without things that really add to it.”
Brad Pitt‘s performance as Jesse James is one of his better turns, a viewer feels. Unlike the various James portrayals of yore, Pitt’s version is “sort of a psycho.” Sam Shepard plays Frank James, and the viewer I spoke said there’s no problem believing that Shepard could be Pitt’s brother despite the former being 20 years older than the latter. The film belongs more to Casey Affleck‘s Robert Ford, “a bumpkin who wants to be part of the gang.”
The film doesn’t end with James’ shooting, but deals interestingly with the aftermath. “It’s sort of about celebrity,” the viewer says. “By killing Jesse Ford figured he’d become a celebrity. [To this end] he reenacts the murder in a show around the country, but he becomes a pariah.”

July 16, 2007by Jeffrey Wells11 Comments
« Previous post
Dump Season vs. Oscar season
Next post »
Tell Me You Love Me