JFK assassination conspiracy mania peaked with the 1979 conclusion by the House Select Committee that President Kennedy was “probably assassinated as a result of a conspiracy.” But the tide began to turn in the wake of Oliver Stone‘s fascinating but much-assailed JFK (’91) and the subsequent publishing of Gerald Posner‘s “Case Closed” (’93), which argued that Lee Harvey Oswald acted alone. I not only feel that JFK is one of Stone’s finest films, but that it’s close to absurd to completely dismiss the scores of hints and indications that Oswald wasn’t the only shooter that day in Dealey Plaza. I’ll admit that it’s theoretically possible that Oswald acted alone, but this has always seemed highly unlikely to me. There is simply too much smoke. Nonetheless Posner’s and Vincent Bugliosi‘s book “Reclaiming History” (’07) have made viewpoints like mine seem a bit dated and outre. 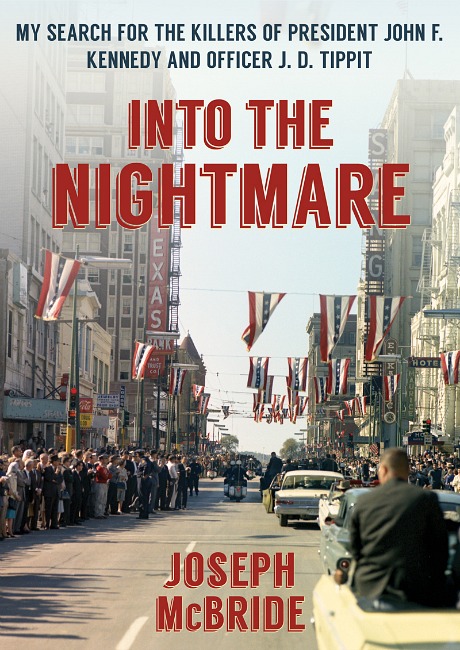 This background makes the recent publishing of Joseph McBride‘s “Into The Nightmare: My Search For The Killers of President John F. Kennedy and Officer J.D. Tippit” — an unregenerate, balls-against-the-wall JFK conspiracy book that thoroughly and painstakingly dismisses the lone-gunman theory — seem extra-nervy. Especially considering that the 50th anniversary of JFK’s murder on 11.22.63 is less than four months off, and the fact that two films that embrace the Posner-Bugliosi scenario are opening this fall — Peter Landesman‘s Parkland (Open Road, 9.20) and the National Geographic Channel’s Killing Kennedy, which will air sometime in November.

I’ve known McBride for years within my own realm. He’s a film scholar and a former Variety critic and a John Ford-Orson Welles devotee and an ally during the 1.37 aspect ratio Shane brouhaha. And therefore Joe McBride is the only “flaming conspiracy wacko” I’ve known in a community sense as well as admired in terms of character and professional dedication and all that. So I can’t just wave away what he’s written here. Because I know he’s a for-real type of guy.

I’m half in the McBride-conspiracy bag and half skeptical, as noted. I totally reject some of McBride’s assertions. (The alleged rear-of-the-skull or occipital blow-out wound, for instance.) I nonetheless have to admire McBride’s diligence in writing this book (a result of roughly 30 years of effort) and his willingness to be regarded at least by some as a conspiracy nutter. Post-JFK, Posner and Bugliosi, publishing a book as hardcore as Into The Nightmare is, in a sense, almost like claiming you’ve seen flying saucers. It ain’t 1979 out there anymore. The JFK conspiracy believers are no longer the thriving culture they once were.

I know that the JFK murder is, was and always will be the Reigning Nightmare of the 20th Century. For many it was the beginning of the ’60s just as the Nixon resignation in August 1974 was the end of that era. Plus I’ve been to Dallas and stood behind the rickety wooden grassy-knoll fence at Dealey Plaza and felt the presence of all those swirling ghosts. It’s creepy but there’s something about that day that just won’t leave boomers and older GenXers alone.

I’ve personally never understood how the “magic bullet” was found intact and yet Kennedy sustained a wound in his right upper back that almost certainly couldn’t have exited through his neck and nicked his windpipe and the knot of his tie and slammed into Gov. John Connally‘s chest and upper leg. And which bullet cracked the windshield of the Presidential limo?

A few weeks ago I asked McBride if he could please explain in a nutshell what he’s uncovered about the actions of officer J.D. Tippit on 11.22.63 and before.

McBride’s answer: “There are many revelations in ‘Into The Nightmare’, but perhaps the biggest is evidence that Officer Tippit was pursuing Oswald through Oak Cliff in the brief period (24 minutes or so) before Tippit’s death. Some have suspected this, but I was able to prove it. I had an interview with his father, Edgar Lee Tippit, who had never been interviewed (he was a lively 90 at the time). Mr. Tippit told me that a Dallas police officer had gone to J. D.’s widow, Marie, and said J. D. and he had been sent to hunt down Oswald in the aftermath of the assassination, but that this second officer had not made it because he was in a traffic accident. [I found evidence there was indeed a traffic accident nearby around the time of the shooting — see pp. 426-427.]

“The significance of this is manifold because the time, Oswald’s identity officially was not known to the Dallas Police Department, which indicates that Tippit was part of a plot to frame or perhaps murder Oswald. There are indications that the plot originally called for Oswald to shoot it out with a policeman on a street or in the Texas Theatre, where he survived capture. Mr. Tippit also told me about his son’s great shooting prowess, which is at odds with the single record about J. D. Tippit’s shooting in his Dallas Police Department personnel file.”

I just can’t buy Oswald being innocent, I told him. He had accomplices? Okay, but not innocent.

“I don’t believe Oswald shot Tippit,” McBride states. “Oswald could not have walked from his rooming house in Oak Cliff in time to have made it to the shooting of Tippit, which occurred about 1:09 p.m., earlier than the Warren Report has it. It’s conceivable that Oswald could have been driven there (which would be further evidence of a plot), but there is no credible evidence he shot Tippit. I produce evidence that two, three, or even four men were involved in the killing of Tippit, and I name plausible suspects while eliminating others.

“I also explore the possibility that Tippit may have been one of the two Grassy Knoll gunmen and that he may have fired the shot that hit Kennedy in the right temple and blew out the back of his head. A CIA analyst, Homer McMahon, who saw the unaltered Zapruder film that weekend said that it showed six to eight shots being fired from at least three directions (see pp. 95-96). I go into considerable detail on what happened to the bullet that hit Kennedy in the right temple and was removed secretly from his body, a story that has not previously been told in such detail.” [See pp. 556ff.]

“In the course of researching the book, I interviewed some key people in Texas, including Edgar Lee Tippit, Tippit murder scene witness T. F. Bowley, former Dallas DA Henry Wade, lead Tippit case Detective James Leavelle, and Senator Ralph Yarborough, who was riding in the car with LBJ in the motorcade and gave me some fresh insights into what LBJ was doing. I also have a detailed interview with Tippit’s mistress Johnnie Maxie Witherspoon and discuss the ‘jealous husband’ theory of the shooting, which I disprove. I studied documents in Washington and Texas and came up with many discoveries in those.” 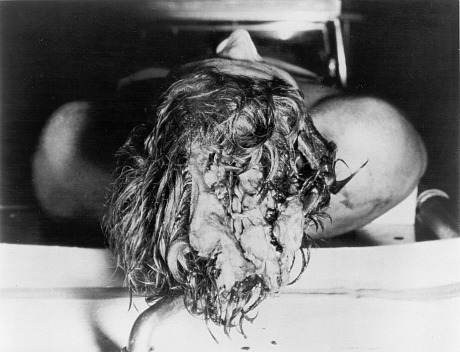 Nobody will ever make me believe that the back of Kennedy’s head (the occipital region) was blown out, I told McBride. Nobody. The right temple opened up big-time and the skin/skull flapped open and over, but no back-of-the-head action. No visual evidence supports that.

“All the doctors and nurses who saw Kennedy’s head at Parkland Hospital said there was a hole in the back of his head the size of a grapefruit,” McBride replies.

“For a long time, I was an agnostic on the Zapruder film being altered,” McBride answers. “Douglas Horne proves it in the fourth volume of his five-part book series “Inside the Assassination Records Review Board: The U.S. Government’s Final Attempt to Reconcile the Conflicting Medical Evidence in the Assassination of JFK (five volumes), self-published, 2009. “The wounds were changed at Bethesda Naval Hospital. Horne finds witnesses (see his books, listed in my bibliography). The autopsy photos are forgeries.”

“The film was altered by the CIA that weekend. It was also ‘damaged’ by Life magazine after it was bought by Time, Inc. I go into this in the book. I have a whole chapter on the film. There are also sections on the bullets and the wounds.

“Evidence of the blowout of the back of the head in the Zapruder film was altered. Also evidence was removed that the car stopped before the fatal shot(s) and Secret Service men surrounded it. Senator Yarborough in my book and other witnesses describe that. The CIA couldn’t alter the violent movement of Kennedy’s body ‘back and to the left’ (as the movie JFK repeatedly describes it), which is one reason the film was suppressed for so many years. When people saw that, they understood shots came from the front.”

“That’s some pretty fast footwork and editing-work on the CIA’s part,” I replied.

“They knew their stuff,” he says. “They had a classified CIA film lab at the Kodak main industrial facility in Rochester, New York, to do the alterations with an optical printer. Homer McMahon and another CIA analyst worked on different versions of the film that weekend at the CIA’s National Photographic Interpretation Center (NPIC) in Washington, D.C., to make frame enlargements and ‘briefing boards’ for internal government use.”