In the wake of Nikki Finke‘s 2.16 article about “shockingly soft” tracking for Disney’s John Carter (3.9), The Daily Beast‘s Chris Lee has written a hit piece (“John Carter: Disney’s Quarter-Billion-Dollar Movie Fiasco“, 2.21) that focuses on possible repercussions if and when the $250 million Carter does indeed tank. 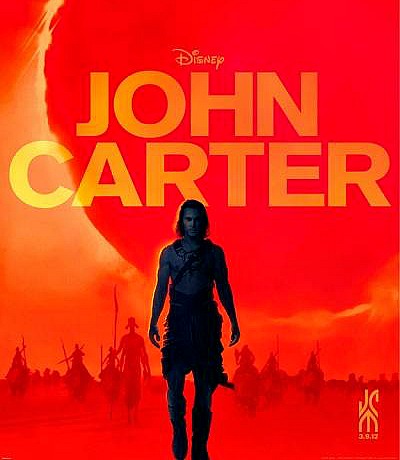 Lee mainly foresees trouble for Disney chairman Rich Ross, even though he states that Carter “is a problem [Ross] inherited from his predecessor” — i.e., former Disney honcho Dick Cook — “and that has provided him a certain level of insulation from the slings of his detractors.”

But the biggest forehead-slapper was the decision by Disney marketers to remove “of Mars” from the title. I understand the thinking that one needn’t show loyalty to Edgar Rice Burrough‘s John Carter of Mars, which began as a magazine serial in 1912. But why make a film set on Mars if you’re afraid to use the words “of Mars” in the title? How wimpy can you get?

“Although the character has been known as ‘John Carter of Mars’ and was envisioned as a movie trilogy under that name, Disney marketers dropped the ‘of Mars’ part because of industry-think holding that female movie fans are more likely to be turned off by such overtly sci-fi elements,” Lee writes. “And after the big-budget failure of last year’s Cowboys & Aliens seemingly confirmed that modern audiences are uninterested in Westerns — or, by extension, vintage Americana — Carter’s Civil War connection has been all but excised from the marketing.

“‘You take out ‘of Mars,’ you don’t tell where he came from? That’s what makes it unique!’ a former Disney executive is quoted as saying. ‘They choose to ignore that, and the whole campaign ends up meaning nothing. It’s boiled down to something no one wants to see.”

“After seeing several John Carter trailers, a rival studio executive agreed. ‘You don’t know what it is,’ the source said. ‘The geek generation isn’t responding. It’s too weird for the family audience. Then it has the Disney brand and PG-13? I’m not sure who it’s for.'”

The best that can be hoped for, it seems, is that John Carter will become the Heaven’s Gate of sci-fi actioners. No, not the most ruinously expensive and financially disastrous film of this genre, but the most ruinously expensive or financially disastrous film of this genre that will eventually a become a cult favorite, as Heaven’s Gate has gradually managed to become with the help of guys like F.X. Feeney.

John Carter‘s principal photography went from January to July 2010, so it’s been in post-production for 20 months, which might as well be two years.

And there’s still no spillage from the John Carter junketeers who recently basked in the Arizona sun on Disney’s dime. A John Carter fansite found some tweets that indicated positive reactions. Here’s another tweet-based summary that suggests positive responses to come.