I finally watched Criterion’s Anatomy of a Murder Bluray, and I have to admit that while I’m adamantly opposed to slashing off the tops and bottoms of films that looked perfectly fine in their natural 1.33 state, and while I would have preferred a 1.66 aspect ratio (if a cropping had to be done), the 1.85 aspect ration began to grow on me after a spell. I came to accept it. It’s not a mauling of Otto Preminger‘s 1959 courtoom drama — just an unfortunate decision. 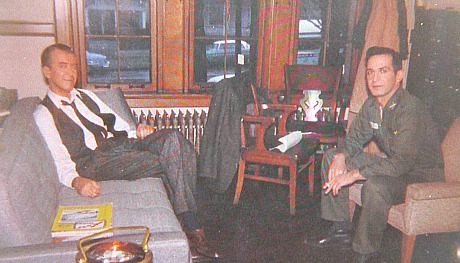 The Criterion Anatomy of a Murder Bluray contains to my knowledge the color photographs taken during the making of the film.

Most of the Anatomy Bluray looks fantastic. Wonderful blacks, enormous range, luscious detail. But every now and then a shot comes along that just looks so-so. Why does Stewart’s hair look a tiny bit soft? Is this starting to feel a little bit grainstormed? Okay, maybe not. But in a certain way, the Anatomy Bluray doesn’t look dramatically “better” than the 2000 ColTristar DVD. I didn’t feel as if it upped my viewing pleasure of the film one iota. It looks better on my 50″ Vizio than the DVD, of course, but that’s to be expected. That’s the format.

I only know that when I first saw that DVD 11 and 1/2 years ago on my 32″ Sony flatscreen, I was knocked out by its beauty. The monochrome tonalites were so rich and vivid that I felt as if I was watching a lab-fresh print in a studio screening room. But when I saw the Criterion Bluray, I went “uh-huh, yup, good work, very nice”…but I wasn’t blown away. I wanted that extra kick, and I didn’t get it. Put your face up to the screen and it’s swarming with natural grain (which is fine) and it looks like real celluloid. So it’s a good job. But honestly? I would been a tiny bit happier with a little digital sweetening, and I’m saying this as a huge fan of Criterion’s Sweet Smell of Success Bluray, which wasn’t sweetened at all. I just know when a Bluray has that extra-special dimensionality and sheen, and Anatomy…well, it’s a solid ground-rule double. Okay, a triple. But it’s no homer.

One thing I did notice is that you can now study James Stewart‘s hair piece (which has too much laquer on it) and figure exactly where the hairpiece ends and the natural hair begins.