Whatever films he makes, however good his performances, Josh Hartnett never seems to score a bulls-eye. Either his movies never make big money (not counting Pearl Harbor) or they never score a 9 or 10 with the critics. They score sevens and sixes, and very rarely eights. He’s a good hombre with talent who’s trying to make quality movies and avoid crap, and my heart goes out to anyone who’s trying as hard as he seems to be. But something needs to happen. 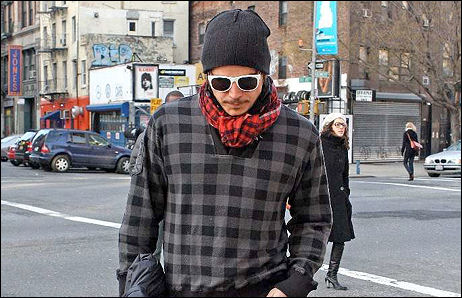 Hartnett is working it, pushing it…he’s no easygoing Charlie. And I really loved his performance as a young guy with Asperger’s Syndrome in Mozart and the Whale. But sooner or later one of his films has to hit it out of the park…no? For him to stay in the game, I mean? As a player who counts?
I was thinking this after reading that August, a drama that Hartnett produced about an internet startup guy (played by himself) struggling with business issues, is finally being picked up by First Look for a July release after playing at Sundance last January. Another Hartnett film that has merit and respect but isn’t quite rock and roll?
His next shot is I Come With The Rain, a film written and directed by Anh Hung Tran (Scent of Green Papaya) that may play at the Cannes Film Festival next month.
Pearl Harbor had a great attack sequence and made money, but everyone hated it. O was “so?” 40 Days and 40 Nights was nothing. Black Hawk Down was quite good, but it wasn’t Harnett’s film. Hollywood Homicide wasn’t half bad, but Harrison Ford was funnier. Wicker Park was a better than decent film, but it felt like another place-holder. Sin City was a CG/film noir show. Mozart and the Whale was, I thought, an above-average heart film with a first-rate Hartnett performance, but no one saw it. The Black Dahlia was, due respect, awful. Resurrecting The Champ was a solid film with a good Hartnett performce, but it fizzled. I didn’t even see 30 Days of Night.
Hartnett has to do or make something that really scores. He can’t just keep dribbling the basketball and making the occasional jump-shot. He has to get people to jump to their feet and cheer.