Judge Not Lest Ye Be Judged

Most of the reviews have been dismissive (i.e., a movie made for popcorn-munching proles) but I respect the fact that The Judge is not really driven by the courtroom scenario, which involves Downey’s amoral, hot-shot Chicago attorney defending his gruff and bellicose dad, played by Robert Duvall, against a hit-and-run murder charge. It’s really a warts-and-all family drama about all kinds of hurt and pain coming to the surface. It’s a bit like a Ross McDonald/Lew Archer book (I was thinking particularly of “The Underground Man“). The court case is deferred to every so often but rotely, almost reluctantly. It’s the clothesline upon which the real meat and matter of the film is draped.

The most bothersome element by far is Thomas Newman‘s music. Early on Downey goes to a funeral home to visit his dead mom. Her corpse is lying in a traditional open casket with hands clasped, and Downey approaches and gently caresses one of her hands with the tips of his fingers, and then covers her hand and holds it. It’s a moment. And then Newman ruins it by nudging the audience with a little piano-key tickle. Thanks Tom! We weren’t sure how to feel about Downey saying goodbye to his mother, but your piano playing has brought it home. Seriously, good scores are always watching the film along with you. When you feel something they feel it too. They don’t instruct; they affirm a bond with just the right emphasis. Newman’s score is almost always squatting in the room before we get there and telling us what to feel, and I began to hate it more and more as the film went on. I’m presuming that Dobkin is the bad guy here also — I’m fairly certain he sat at the control board during post and told the technicians, “Okay, a little more emotion here…a little more piano….we need to reach out and touch people…c’mon.”

I was also irritated by the gristly GQ man-beards (seven-day growths) worn by Downey and his overweight costar Vincent D’Onofrio. Coarse sandpaper faces have been with us for a couple of decades now, and outside of young hipster types they don’t seem to have caught on in the culture. For the most part guys tend to shave, especially professional-level guys in suit and ties, and double-especially attorneys. I’ve seen one or two attorneys in real life or on a Court TV interview with a salt-and-pepper face, but mostly I see this look in films and TV dramas. I think it’s strictly a kind of machismo badge that industry guys wear to look cool — a kind of advertisement for themselves and their studliness. I’m surrounded by guys at the Toronto Film Festival and they all either have clean-shaven faces or actual beards. Nobody but nobody is walking around with a seven-day-growth thing. 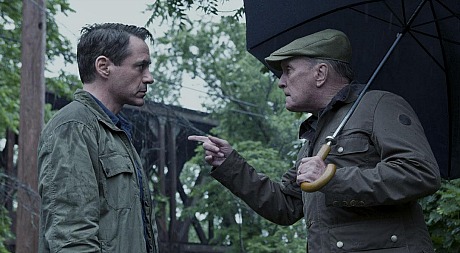 September 5, 2014by Jeffrey Wells9 Comments
« Previous post
Before The Work Was Done
Next post »
Who Needs Oscar Noms?