I dropped by the Four Seasons two days ago for a chat with Keri Russell. Not to talk about her latest film, August Rush (Warner Bros., 11.21), a Claude Lelouch-ian musical fantasy which I haven’t written about yet, but Waitress, which Fox Searchlight opened last May and which will re-open on DVD on 11.27. Directed by late Adrienne Shelly, it did well by reviewers and earned $20 million domestically. 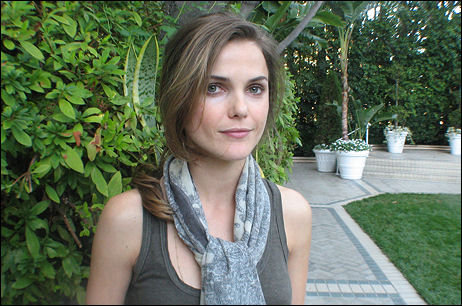 Russell is friendly, casual, open. Like any successful actress, she knows how to charm without making it seem like an effort. Now 31, married and a mother of five month old child, Russell has been a working actress since she was 15. She has the agreeable aura of someone who’s lived through some ups and downs, and has been made wiser and stronger from this. She doesn’t seem the least bit neurotic or nuts. (Aren’t actresses are supposed to be a little bit twitchy?) Whatever — she’s an easy conversationalist.

I was okay with Waitress except for two significant things.

One, I couldn’t understand why Russell’s character, a spirited small-town waitress with a gift for cooking exquisite pies, is married to such an uncouth blue-collar pig (Jeremy Sisto). She’s bright and sensitive and appreciates the eternals, and yet she’s married to a brute caveman who does everything but club her on the head and drag her back to his cave by her hair. Such a relationship didn’t seem the least bit believable. In my experience animals hook up with animals and women with creative longings (stifled or otherwise) tend to hook up with guys who respect and understand them to at least some degree.

Ellen Burstyn was married to a guy like Sisto (played by Billy Greenbush) in Alice Doesn’t Live Here Anymore, but director Martin Scorsese solved the credibility problem with a two-line exchange. Burstyn’s on-screen son asks her why she married him and she says, “Well, he’s a good kisser.” That, at least, is some kind of explanation. Waitress provides nothing along these lines.

The other problem is that Russell’s affair with a small-town doctor (Nathan Fillion) goes on for months and months and no one gets wise including the doctor’s wife. Lovers make mistakes. Infidelity always comes out in the wash. People in one-horse towns always know who’s diddling who. It was nice not to have to deal with all that hurt and anger, but I still didn’t buy it.