I posted my admiring review of Thomas Bezhucha‘s Let Him Go on 11.3.20. I described it as “a kind of period western, set 50 or 60 years ago, about family, horses, children, continuity, guns, axes and fingers…so well composed, so exacting, so nicely honed.”

In short I was totally thumbs up for all aspects of this Kevin Costner-Diane Lane drama, except for one or two that I couldn’t discuss.

SPOILER WARNING: That was over a month ago. Let Him Go has been streaming since 11.6.20. So I’m posting a discussion I had with a friend about it on 11.2.20. If you’d rather not read, please don’t but either way SPOILERS await.

HE to friendo: “I’m loving Let Him Go…loving the mood, tone, cinematography, muted behaviors. But Lesley Manville and her scurvy yokel sons just chopped Kevin Costner’s fingers off and I really, REALLY didn’t like that. You don’t chop off the fingers of the laconic, tough-as-nails hero….you don’t do that!” 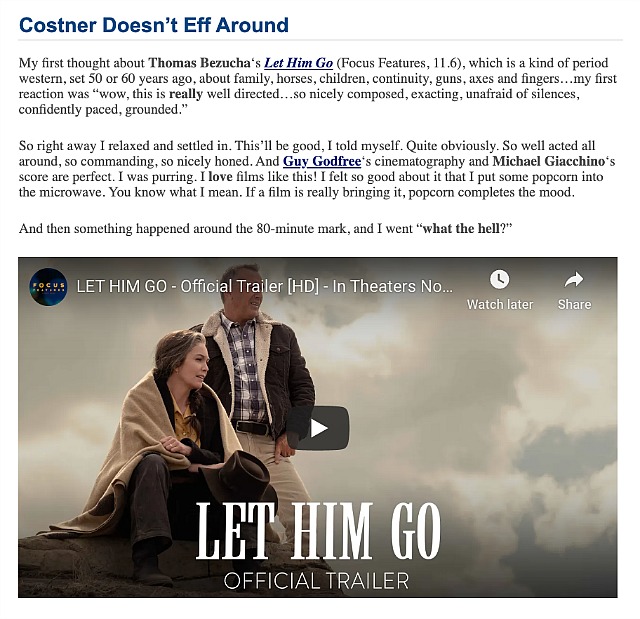 Friendo to HE: “[The finger-chop scene is] one of my favorite things in the film. You’re right — you don’t do that. It’s not done. And that ‘rule’ makes our hero feel implicitly protected. So that rule-breaking moment raised the stakes. It said: These people are THAT dangerous — the hero isn’t going to be protected by the usual hero mythology.

“I thought the horror of that event made what followed more suspenseful, as well as placing George on a path toward martyrdom (though we don’t know that yet).”

HE to friendo: “Kayli Carter is the villain of the piece. She had a good gentle husband (the son of Costner and Lane) and then, with a young son, she married a violent sociopath (Will Britain). She couldn’t sniff a whiff of trouble from that guy? Any half-intelligent adult could have. Especially with a three-year old to think about.

“Diane Lane was distant or less than embracing after her son died and so Kayli had no choice but to marry the first available psycho who came along? After all is said and done, that kid is going to be seriously traumatized for the rest of his life. Years of therapy.

“And of course Manville and her scurvy, white-trash, seed-of-Satan sons are cut from the same cloth that Trump supporters will come from 50 or 60 years hence. OF COURSE they are. Trump yokels + Deliverance + Australian crime family.

“And why did Kayli rat them out by telling Manville & Sons that Costner/Lane wanted her to move back with them? She knows that awful family is violent & territorial and yet she told on them?

Friendo to HE: “That plotting with the daughter is a weakness; it’s fuzzy. But I don’t think she’s villainous. The implication is that Donnie kept his true nature mostly hidden.

“She was just confused and clueless. Certainly the film is pretty clear about the fact that once she’s there, she hates her life with the Weboy clan. How could she not? She and the boy are total prisoners, and the Weboys rule — that is, they rule her by terror.

“The friction between her and the Lane character is way, way underdeveloped. Probably on the cutting-room floor. It’s just a hole, a storytelling flaw, you have to accept. But even so, I think the implication is that she didn’t KNOWINGLY marry an abuser.

HE to friendo: “Agreed — the bad blood between Kayli and Diane is barely mined. It only comes out after the luncheon meeting..

“One, she walked right into a marriage with a man who almost certainly would’ve exuded a certain undercurrent, that ‘uh-oh’ feeling you can always sense. Abusers might hide their worst instincts, but any half-attuned person can always pick up a signal or two.

“But what a shame as the writing and careful pacing and the general feeling of unhurried confidence on Bezucha’s part are impressive. The last time I recall being this taken by his work was way back in the day of The Family Stone.”

Friendo to HE: “It’s not that I’m buying it or not buying it. It’s that, like the Kayli-Diane tension — or, for that matter, the issue of how blind Kayli was to the fact that her ‘nice, charming’ new husband has a dark side — these are issues of sketchy/flawed screenwriting. You could watch the film a dozen times and these would remain things that simply don’t parse, because (I suspect) they were more convincingly explained in scenes that are now cut.

“But in terms of why Kayli squeals, I think it kind of IS explained, or at least suggested. She’s terrorized by the Weboys (she’s basically living in hillbilly prison camp), but because she’s kind of a weak, passive soul, she’s got a touch of Stockholm Syndrome. She always invests authority in the other — be it James and the Blackledge family, or Donnie, or even, in a certain living-in-a-nightmare way, the Weboy monster clan.