The only problem I had with The Kids Are All Right was that Mark Ruffalo‘s character is just shit-canned at the end. Banished for the sin of having had an affair with Julianne Moore. The kids dismiss him, the movie dismisses him…dead. But the audience is left thinking, “Okay, he made a mistake and he’s a little immature, but he’s a half-decent sort and the kids’ biological dad. Does he deserve to get thrown out like a half-eaten carton of McDonald’s fries?” 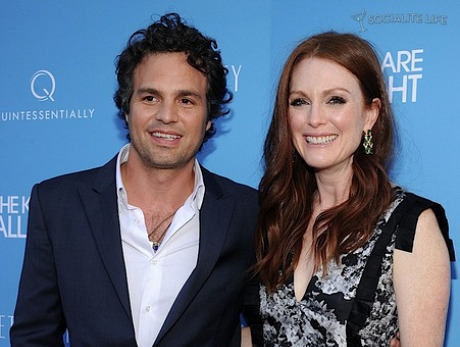 Well, Scott Feinberg has obtained a March 2009 copy of the Kids script and discovered that Ruffalo’s character, Paul, was actually defended and afforded a certain respect by Moore’s character, Jules, during her big confession speech at the end. Here’s how the scene reads, says Feinberg:

JULES: “I need to say something.”

Everyone sits up. Jules has a look of strength and resolution we’ve yet to see before.

JULES: “Look, it’s no secret your mom and I have been going through a rough patch lately. That happens in marriages, especially ones that have lasted as long as ours. But instead of looking at our problems and trying to deal with them head-on, I went and did something really stupid. It may be shocking to you, but adults aren’t exempt from making mistakes. Anyway, I know you’re all really furious with me. I can take that. I’m a big girl. But what I can’t take is the thought that my bad decisions have ruined your relationship with a good man…

“Call him what you want, Nic, but Paul’s a good guy. No, he isn’t blameless, he was there too. But if I’m gonna be honest about it, the person who really pushed it was me.

“I know this whole thing’s confusing. I wish it wasn’t. But life’s just like that sometimes.”

And with that, Jules hands the remote back to Laser and departs the field. Everyone’s shocked by Jules’ show of strength, especially Nic.”

JULES: “Your mom and I are in hell right now and the bottom line is marriage is hard. It’s really fuckin’ hard. It’s just two people slogging through the shit, year after year, getting older, changing — fucking marathon, okay? So sometimes, you know, you’re together so long you stop seeing the other person, you just see weird projections of your own junk. Instead of talking to each other, you go off the rails, and act grubby, and make stupid choices, which is what I did. And I feel sick about it because I love you guys, and your mom, and that’s the truth. And sometimes you hurt the ones you love the most, and I don’t know why. You know, if I read more Russian novels… Anyway… I just wanted to say how sorry I am for what I did. I hope you’ll forgive me eventually. Thank you.”

Feinberg’s assessment: “I don’t know how the speech in the March 2009 version evolved into the one that made the final cut, but the fact that it did changed the entire tone and direction of the film. In the earlier version, Jules apologizes, just like she does in the later version, but she also pointedly stands up for Paul. The problem with this course of action is that Nic, who is no shrinking wallflower, probably wouldn’t take kindly to hearing her wife — with whom she is already not speaking — defend her lover.

“The benefit, however, would be an improvement in the character arc of Paul, a character with whom we spend a lot of time and come to like, but who is abruptly shunted out of sight in the final cut. The speech in the March 2009 version lays the groundwork for another event that takes place in that script but not in the final cut: the family, at Joni’s request, makes a brief stop at Paul’s place to allow Paul and Joni to reconcile before she heads to college. This, perhaps, would have offered Joni a greater sense of peace and the audience a greater sense of closure.”