My Kind Of Implausible

For a full 93 seconds Hitch showed audiences only the back of Cary Grant‘s head. To prolong the who-is-this? effect he had costar Ingrid Bergman speak three lines to Grant, who was shown sitting down and drinking at a small party at Bergman’s home but saying nothing in return — not even gesturing in some way. This is implausible in and of itself — who aside from John Barrymore‘s corpse sits at a party rock-still and says nothing? But it’s okay because what we’re seeing is better than reality.

Bergman pours Grant a drink, sizes him up and asks if she knows him. Nothing. Then she says, “That’s okay, I like party-crashers.” And a woman dancing nearby says, “He’s not a crasher — I brought him.” And you’re thinking, “Okay, but what’s the deal with this guy?” You’re also wondering why doesn’t he offer some mild little pleasantry when Bergman says, “You know something? I like you.” Does he smile, wink, roll his eyes? All we see is the stillness and the shiny black hair.

And yet it’s obvious he’s Mr. Cool. Finally the dangle ends after a minute and 33 seconds, and in the next scene the camera finally introduces that familiar cleft chin and those cow eyes. 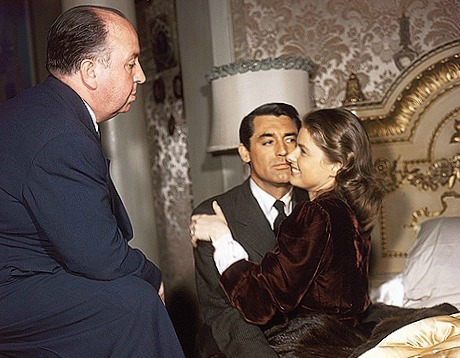