King of the World

I saw Drive again last night, and it felt just as assured and double-downed and Peter Yates-y as it did last month in Cannes. And then I ran into the very cool Albert Brooks at the after-party, which was held on the rooftop of the Standard Hotel on Flower Street. And he told me a few things about his part and the film and paid me a nice compliment (“I’ve read you all along, and you’re the ‘fuck you to the studios’ guy…somebody’s gotta do that, right?”) and…well, it was all to the good. 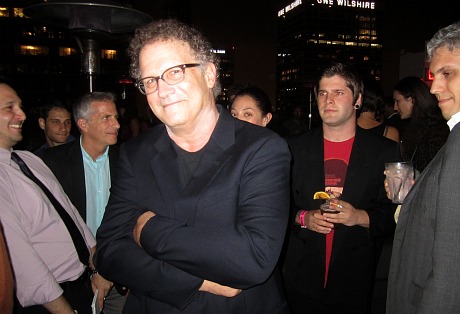 Wait…is that a compliment? It felt like one when he said it, but I don’t see a “fuck you” guy when I look in the bathroom mirror. I suppose I gave off that vibe to some degree in the early to mid ’90s, okay. But my attitude has mellowed down a lot, especially since I started running the site myself in ’04. Today I see myself as more of a “fuck you to the geeks and grain monks” guy who’s enslaved to a daily column.

Brooks is so deliciously direct in Drive — cynical, snarly, smart-mouthed. And yet good-humored at times. His Bernie Rose, a former schlock movie producer, is one of those tasty-ironic characters, mostly “written”, of course, but also a series of riffs and rim-shots that Brooks seems to have co-written or half-improvised as he went along.

Bernie doesn’t like mincing words and futzing around with low-lifes but he does enjoy wordplay on a certain level and reflecting on the past, etc. He’s crafty and cunning and straight…and so corrupted he’s lost sight of whatever he might have been in the ’80s. I wish the script could have given Brooks/Bernie just a bit more humor and meditation (and less in the way of artery-slicing), but what’s there is fine, quite fine.

“Why did Refn come to you with this role?,” I asked him. “The character is obviously a big departure, in no way a reflection of anything you’ve done before.” Part of his answer alluded to Refn’s “Danish perspective.” But mainly, he said, the casting came out of his Winnebago temper-tantrum scene in Lost in America. “Refn said when he saw that scene as a child I scared him…my anger scared him half to death,” Brooks said. 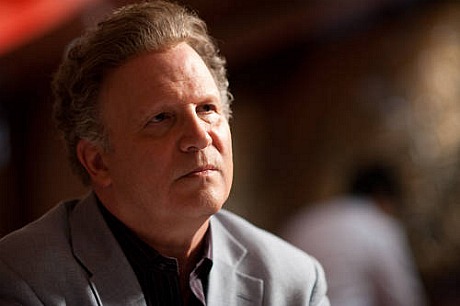 “Why did you wear a toupee in the film?” I asked. “You’ve got enough hair…you’re fine.” Because, Brooks said, it added to the character — it put me into that place. I think he also meant that Bernie Rose is the kind of guy who might wear a rug, or something like that.

Brooks seems to be in some kind of peak mode these days. You should have seen him saunter out last night when Refn introduced him to the crowd. He came out like a punk, like a guy who doesn’t know how to play it humble or demure or be anything or anyone but himself. He’s unbowed, feisty, iconic. He’ll always be one of our smartest, funniest and most ambitious director-writers. (In a better world he’d be cranking out film after film after film like Woody.) He’s got a best-seller in stores, and he’s a world-class tweeter. He’s worth his weight in gold.