It’s been nearly three months since I saw Peter Berg‘s The Kingdom (Universal, 9.28), and some of the details have faded. But I remember the fundamentals. It’s basically C.S.I Riyadh with a slowish first two acts and then a wowser third-act shootout — a team of FBI guys and a few Saudi cops blowing away several terrorists (a couple of dozen, at least) who were behind the bombing of an American compound and the deaths of several Americans early on. Crazy-ass towelheads…get ’em! 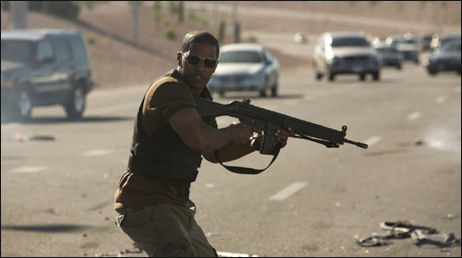 It’s good material in a keep-it-simple, shoot-the-bad-guys way. Which is what audiences want, right? Millions have made a point of avoiding dramas that have taken earnest, realistic approaches to the Middle Eastern conflict (A Mighty Heart, In The Valley of Elah), and are likely to continue doing so. Leave us alone! Not entertaining! Too gloomy!

Well, they can rest easy this time. The Kingdom is mindful of present-day political currents as well as the history of the region, but the story is relatively straightfor- ward, uncomplicated and non-lamenting. No guilt trips, no left-wing directors or screenwriters telling auds what a tragedy the Iraq War has been for everyone… none of that messy stuff.

The problem is that most of The Kingdom is about how bogged down everything gets when this FBI team, based in Washington, D.C. and led by Jamie Foxx with backup from Chris Cooper, Jennifer Garner and Jason Bateman, tries to go Riyahd in the first place to investigate the blast.

Roadblock this, impediment that…it just goes on and on. It’s a hassle getting diplomatic permission to fly over there. And then it’s a political Gordian knot trying to circumvent the Saudi Arabian authorities, led by Col. Faris Al Ghazi (Ashraf Barhom), who initially keep the team from gathering fresh, first-hand evidence.

In short, you have to slog through the first and second acts to get to the rousing third. The finale is worth it, and the depiction of the bombing at the very beginning is well -handled. You just have to grapple with the slow stuff for 60 or 70 minutes. The film lasts 110 minutes, the opening credits and the explosive opener eat up 10 or 15 minutes and the big finale (hot and heavy shootout on a highway, big shoot- out in an apartment complex) goes on for maybe 15 or 20 minutes…maybe a bit longer.

I don’t want to put The Kingdom down too strongly. Berg’s Friday Night Lights was a better film, but you can’t say the newbie isn’t a decent time-passer. And if you can get into the adrenalized excitement of blowing away wild-eyed, wack-job terrorists in the same way it’s fun to shoot at empty beer cans in your back yard with a pellet gun, so much the better. 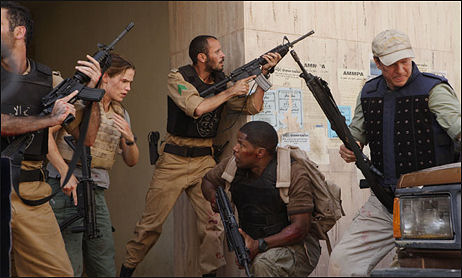 I don’t know why Garner is on the team in the first place. Aren’t Middle Easterners basically patriarchal and sexist? Why would an FBI team want to complicate matters by bringing in a woman on top of everything else? She spends an awful lot of energy, in any case, showing womanly emotion whenever anyone gets hurt or any time things get hairy. Who needs a partner on the team whose eyes are always getting moist? Whatever happened to the spirit of Sigourney Weaver in Aliens? Suck it in, get hard, kill the enemy…end of story.

And I don’t know why Jeremy Piven plays the American ambassador to Riyadh — he’s basically giving us a diplomatic Ari Gold with gray hair.

Foxx delivers an okay phone-in hard-guy performance. Cooper does his usual crusty contentious moves. Barhom handles himself well. Let’s just not get carried away here. The Kingdom‘s all right, but you need to try and keep things in proportion when you’re putting your thoughts to print.