Rather rails against news control

In explaining his $70 million lawsuit against CBS, Dan Rather recently claimed on Larry King Live that news reporting is being routinely diluted, brainwashed and diminished by corporations and big government “Somebody, sometime has got to take a stand and say democracy cannot survive, much less thrive with the level of big corporate and big government interference and intimidation in news,” he told King last Thursday. 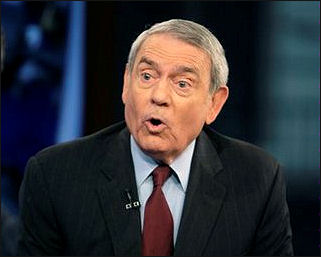 In other words, the de-corporatized and disenfranchised Rather repeated almost precisely what was said four years ago in Robert Kane Pappas‘ Orwell Rolls In His Grave.

Boiled down, the doc (which I reviewed at the end of Sundance/Slamdance ’03 when I was working at Movie Poop Shoot) is about the effects of the news media companies all being owned by six or seven giant corporations, and the increasing uniformity and lack of diversity that’s resulted in their coverage of major stories and issues.

Pappas noted that the mainstream media system is basically a subsidiary of corporate America, and asked if big-media companies have become an anti-Democratic force in this country.

The doc went on to present the case that the news media companies aren’t as interested in exposing facts or keeping an eye on political corruption as much as perpetuating their own power as the shapers of a kind of dozing, status-quo, no-rough-edges view of the way things work, while scrupulously avoiding hard truths about same. 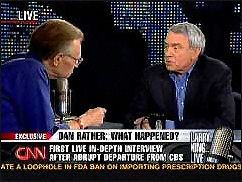 Rather told Bill Maher the following last March: “This nexus between the press and the people they’re supposed to cover has become far too close, far too chummy. And, frankly, I think there’ll be some correction as a result of the Libby trial, or at least a little more often, saying, ‘You know, I need to have access, but there’s a limit to the price I will pay for that access.’