Michael Caine‘s Jack Carter is an icy, ruthless bastard in Mike Hodges‘ Get Carter (’71). A real brute and a shit of a human being, and yet curiously emotional in a deeply buried sense. Which is to say a psychopath who cares about “family”, or at least about a certain offspring.

Carter is emotionally enraged, to put it mildly, over the death of his brother and the sexual molestation of his brother’s (or more likely Carter’s) daughter, Doreen (Petra Markham) and yet brusquely efficient when it comes to dispatching certain citizens of Newcastle. Five, to be exact, and none of them assassins or muscle types (like Carter) but basically go-alongers.

What stands out in Get Carter isn’t so much that Caine murders three shady fellows — Ian Hendry‘s “Eric Paice” (whose eyes are like “pissholes in the snow”, Carter observes), Glynn Edwards‘ “Albert Swift” and Bryan Mosley‘s “Cliff Brumby” — but also a pair of youngish, attractive women — Geraldine Moffat‘s “Glenda” and Dorothy White‘s “Margaret”.

These two aren’t killed in the heat of rage or passion exactly, but because of their laissez-faire complicity in nudging Doreen into performing in low-rent sex films. They are disposed of without any feeling, but certainly decisively and with absolute precision. (Okay, Glenda isn’t deliberately killed but she certainly wouldn’t have died if she hadn’t associated with Carter, and her ghastly manner of death — drowning in the trunk of a submerged car — rouses not the slightest emotion on his part.)

What other big-screen bastard has killed two prime-of-life women for what boils down to a moralistic motive — for going along with the corruption of a child? I can think of only one other murderer of this generally cold-blooded sort — Richard Widmark‘s “Tommy Udo” in Kiss of Death (’47), although his victim was an elderly, wheelchair-bound woman (Mildred Dunnock).

Seriously, what other bad guy has iced an attractive younger woman or two without blinking an eye? Caine’s Carter isn’t alone, but the others aren’t coming to me. 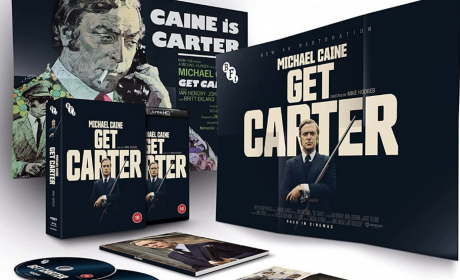 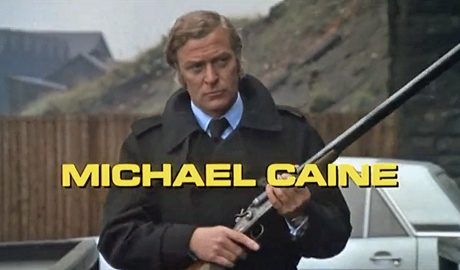