The best thing in Andrew Wagner‘s Starting Out in the Evening (Roadside, 11.23) is Frank Langella‘s performance as a sixtyish, once-great novelist named Leonard Schiller who’s retreated into a congealed, emotionally blocked-off place as a defense from the narcotized reality that his writing career has all but shrivelled up and died. 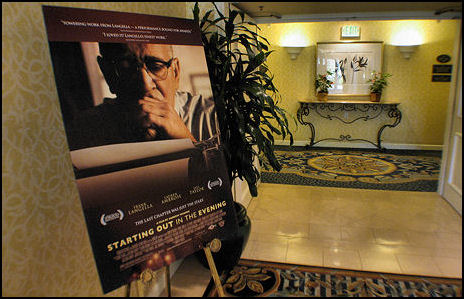 I can’t say I “liked” the character but I was moved by the undercurrents that Langella is able to suggest exist within. At first Schiller is a guy whose purpose in life seems to be to find new ways to be dull. Everything he says sounds slightly condescending and a little too pat. He dressed like a banker with a head cold. There’s no hint of any kind of a Manhattan iconoclast in him whatsoever. At first I wanted to see him get hit by a cab or a bus, but I slowly began to care for the guy and relate to his fears and regrets.

The story is about Schiller feeling vaguely irritated, intrigued and then finally aroused by a graduate student (Lauren Ambrose) who tries to get to know him so she can write a senior thesis about his novels. Naturally, certain longings kick in, and this May-December, teacher-pupil relationship gradualy becomes…uhm, not quite sexual but something more than platonic. On top of which there’s Schiller’s 39 year-old daughter (Lili Taylor) and his being concerned about her search for a lasting relationship and the right man to father a child.

I’m especially excited about seeing Langella’s performance as Richard Nixon in Ron Howard‘s movie of Frost/Nixon, which will be out sometime next fall. Langella is just now starting work on Richard Kelly‘s The Box, which is shooting in Boston. He’s a very good and bright fellow and an immensely respected actor. He used to live in my home town of Wilton, Connecticut, in the early to mid ’70s .

Here’s an mp3 of a chat I had with Langella last week on Friday, 10.19, at the Four Seasons hotel in Beverly Hills.

October 30, 2007by Jeffrey Wells9 Comments
« Previous post
“Bee Movie” is “amiable but no more”
Next post »
Olsen talks to Riley