It’s not that I’ve always loathed metal, although I have. I also think you have to be a bit of a low-life to play it, much less be a fan…right? What would the ghosts of Gustav Mahler or Chet Baker say about metal bands if they were brought back to life? They’d say, “Can we be dead again, please?” Metal, for me, is still the reigning metaphor for the coarsening of civilization. It’s for primitive, thick-fingered types who get high a lot and don’t want to know any better. Sorry. 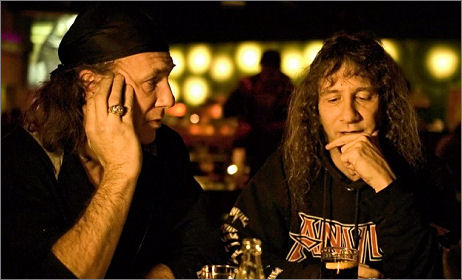 But there is God and spirit in the playing and savoring of all music, even metal, and the love that the fans feel for it, however pathetic, is as genuine as my love for The Who, Patti Smith, Queen, Joni Mitchell, the acoustic sets of Kurt Cobain, early (’63 to ’66) Rolling Stones tracks and Bernard Herrman‘s score for North by Northwest.

And I have to say, late as I am to the table on this, that Anvil!: The Story of Anvil — which opened last Friday in select cities — is one of the saddest (as in funny-sad) and most recognizably human, emotionally touching rock-music documentaries I’ve ever seen. Seriously.

It’s about a has-been metal group that I’d barely heard of (mainly because they never really made it commercially), and an attempt by the now-50ish members — Steve “Lips” Kudlow, Robb Reiner and Glenn Five — to get their lives going again. They were admired by some but their albums were reportedly poor sounding and they never tapped into any real money. And now they’re grappling with intimations of mortality, bald spots and ticking clocks, but they have to give the career-restart thing a go anyway. How can anyone not love that?

We first encounter them living rural, dead-end lives and trying to gradually make things happen again. Sisyphusian and then some. We see them going through some fairly anxious moments, often, as well as some depressing ones, and also some that warm your heart. And some that are close to hilarious — loser humor that only guys who’ve actually gone through the doldrums coudl come up with. (Talking to the camera about a European tour in which many things went “drastically wrong,” Lipps adds that “at least there was a tour for it to go wrong on.”) 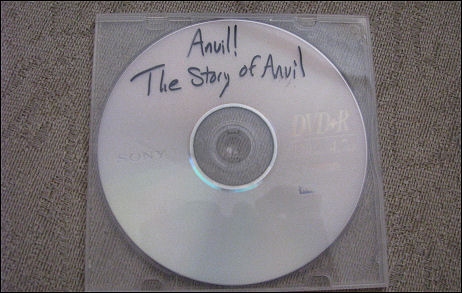 There’s also a moment that’s damn nice in a familial way. And the ending is pure Hollywood.

I mean it about the heart-warming element. Lipps and Robb are nice-enough guys, but they’re basically apes playing ape music for the ape masses (let’s face it), and you can’t help but root for them. Theirs is a passion play for the ages — a universal never-say-die parable about the water that we all long for. The size of the fight in the dog and all that. Listen to this riff about the ticking of time,, initially voiced by Lips and seconded by Reiner. The whole film, in a way, is in this one passage.