I’d been hearing good things about Patrick Creadon’s Wordplay since it played at last January’s Sundance Film Festival, but missing the subsequent screenings. So I leapt at the chance to see it last night (i.e., Tuesday) at Santa Monica’s Aero as part of Pete Hammond’s KCET screening series.
I expected something smart, engaging, amusing (Jon Stewart being one of the talking heads), but I wasn’t expecting a Mensa-style “heart” movie about an extended family. That’s what Wordplay is, and why it ought to keep playing and playing in urban blue-state areas, and — who knows? — maybe all over. 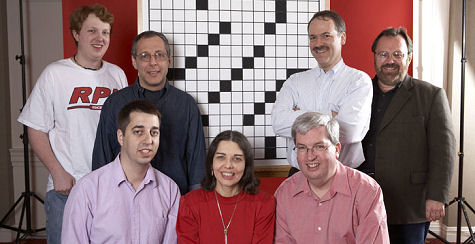 I never thought I could get so caught up in the lives of intellectual game-players and puzzle fanatics, but there’s an emotional current to their existence that’s just as real and embracable as anything you’ve seen or felt on The Waltons or Malcom in the Middle or any other hokey family TV series.
I feel nothing but loathing for the family-relationship pablum in those two Cheaper by the Dozen films, but Wordplay is the real deal — a movie about a family of engaging eccentrics whose brains cross paths every morning via The N.Y. Times crossword puzzle, and who bond with each other every year in a very warm and fraternal way at an annual Crossword Players tournament in Stamford, Connecticut.
< ?php include ('/home/hollyw9/public_html/wired'); ?>
Wordplay started out as a profile of N.Y. Times crossword page editor Will Shortz, but gradually expanded into a group portrait of six hardcore types — crossword constructor Merl Reagle, pudgy not-quiter Al Sanders, congenial former champion Ellen Ripstein, super-brilliant Trip Payne, a 20 year-old whiz kid named Tyler Hinman, and a bespectacled Tin Pan Alley piano player named Jon Delfin.
The Philadelphia Inquirer‘s Carrie Rickey calls them “word nerds.”
I’ve always felt so intimidated by the N.Y. Times crossword puzzle. Some of the words and clues are so arcane and obscure. Until I saw Wordplay I was totally unaware that there’s a kind of grass that grows in the wide-open midwest areas called “redtop.” But now I feel like becoming a crossword addict regardless. The movie is that infectious. 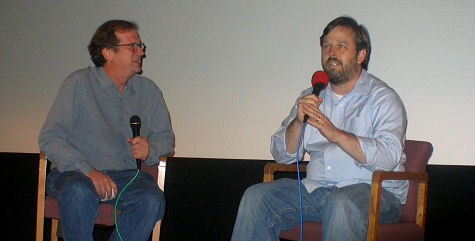 Wordplay sure is fantastic publicity for the New York Times and longtime editor Shortz.
Celebrity guests besides Stewart include the charming Bill Clinton (who’s constantly grinning and filling out a crossword puzzle as he talks with Creadon), Bob Dole (who finally consented to be in the film when Clinton called and urged him to do so), documentarian Ken Burns, the Indigo Girls, and Yankee hurler Mike Mussina.
Everyone in the film worships the daily Times puzzle as the “gold standard.” No other puzzles from any source are even mentioned except for USA Today‘s, and when it comes it’s a put-down.
Wordplay ends, predictably, with the March 2005 championship tournament. The suspense kicks in when the final three contestants go up against each other in front of an audience, writing their answers on large-sized posterboard crossword grids. You can figure out who’s probably going to win, but you’re never 100% sure. 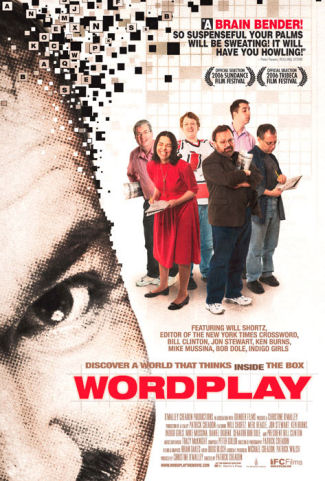 Skeptics should understand that while Wordplay is about some very smart people with phenomenal vocabularies, it’s not a snob movie at all. The Wordplay Seven are good people with containable egos who care about crossword puzzles like others care about baseball or basketball or going to church.
There’s some fairly terrific graphic work by Brian Oakes that brings the viewer into various crossword games that are played throughout the film, creating a play-along excitement that most audiences will find extremely cool.
I suggested during last night’s q & a with Creadon that a smarty-pants reality TV series could be created out of the day-to-day lives of the Wordplay family. It could crescendo each week — on Sunday night, naturally — with the six or seven principals jumping into the Times Sunday crossword puzzle.
IFC Films opened Wordplay in Manhattan last weekend on four screens and took in $32,847 for an $8200 average. The film goes out nationwide this Friday (6.23).