I was talking with a friend yesterday about scenes in movies that aren’t intended to be funny, but which some of us laugh at anyway. Because we have a perverse sense of humor, if not an out-and-out cruel one at times. I’ve repeated this observation often since I began writing this column in October ’98, but the cruelest jokes are always the funniest. (Mort Sahl said it.) In any event, two of my personal faves came to mind yesterday. 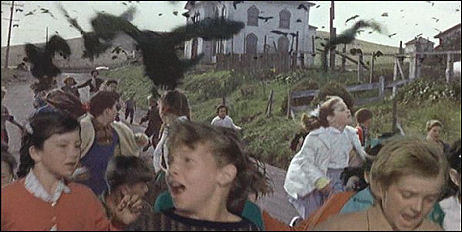 One, the crow attack upon the school children in Hitchcock’s The Birds. I only started to see the humor after my kids started laughing at it, which first happened when they were 12 or 13. These kids are so fake in every which way that none of us are laughing at actual children being terrified by predatory birds — we’re laughing at bad child actors being pecked and scratched to death by CGI birds…there’s a difference. Okay, I don’t exactly “laugh” when I see this scene. I smile and chuckle and say to myself, “Get ’em!”

Two, the moment when the lights go out on Charles Bronson in The Great Escape, when he’s on the little wheelcart in the escape tunnel. His character, Danny the “tunnel king,” has been grappling with claustrophobia all through the film, so it’s not surprising when he’s alone in the tunnel and suddenly everything goes black that he freaks out and goes “whuhhnn!!” I’ve had this reaction for decades because I don’t believe it. It’s too sudden of an emotional shift for the character — Bronson’s moans are too broad. I only know I’ve been getting a good cackle out of this for years.

There’s another moment in The Great Escape that I don’t find “funny,” but gives me great satisfaction all the same. It’s the moment when “Ives” (Angus Lennie) finally loses it and is shot to death by the Germans as he tries to scale the barbed-wire fence.

Staring at poor little Ives as he hangs lifelessly from the barbed wire fence.

I despise the broad and very calculated theatrical manner in which Lennie performs — the over-sold Scottish accent, always trying to angle everything the cute Scottish way (i.e., the inflection he gives to the line, “Are you there, Hilz?”), that little lopsided smile, the fact that he stands about 4′ 10″, etc. My feelings are such that I don’t distinguish between Lennie’s acting style and the character. I only know that when Ives takes several machine-gun bullets in his back, I always feel the urge to stand up in my living room, raise my fist in the air and go “yes!”