Will the retooled, slightly shorter version of Richard Kelly‘s Southland Tales, which is opening on 11.14 via Samuel Goldwyn, pass muster as a satisfying surreal experience? Will it at least end up as a favorite in the cult movie section at Blockbuster? 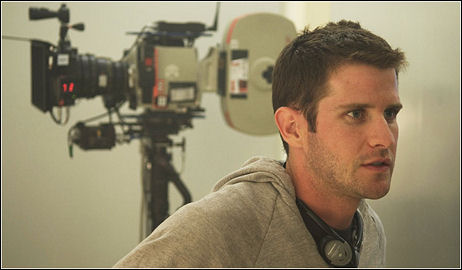 The reason I tend to mistrust and sometimes avoid trippy, off-the-planet movies is that it’s a very tall order to create an alternate universe that hangs together on its own terms.

Movies with a deconstructionist attitude that invest in oddball imaginings for their own sake (as Terry Gilliam‘s films tend to do) can feel like a drag after 15 minutes if they haven’t been fortified with serious thought. You need a scalpel-like brain, a furious belief system and a unified vision, and sometimes a bent sense of humor thrown in to give it that extra schwing. That diseased-but-refined quality that guys like David Cronenberg, Luis Bunuel, David Lynch, Alex Cox and Ken Russell have dispensed in the past. My favorite all-time trippy movies include Repo Man, Mulholland Drive, Naked Lunch, Mahler, Lost Highway and Scanners.

The second half of the version of Southland Tales that bombed in Cannes 17 months ago was, I felt, pretty remarkable. It was the first half and especially the first 20 or 30 minutes or so that threw most people off. Like Kelly’s Donnie Darko, the recut Tales will probably play better with the under-35s. Every person I saw get up and walk out of that calamitous early-morning screening in Cannes was, I distinctly recall, gray-haired. 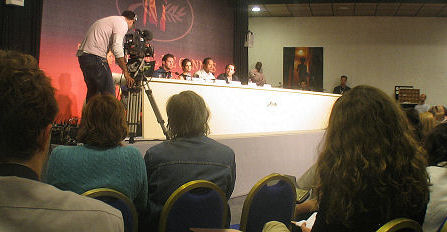 I called it “a very long throw of a surreal wackazoid football — a stab at a great, sprawling GenX apocalyptic nightmare about an Orwellian police state running things a couple of years from now.

“I liked portions of Kelly’s film here and there (especially the musical numbers and the wild fantasy stuff that kicks in toward the end), but mostly it felt like a struggle and a muddle. I’m sorry to say this because I think Kelly is one of the best younger filmmakers around, but this is the kind of difficult film that only an audacious visionary could make.”

In an interview with N.Y. Times contributor Dennis Lim, Kelly reveals that “the most significant change in the new cut is a brisk prologue that charts the major developments in the film’s post-nuclear America. Kelly [also] added special effects ($1 million worth) and reordered and tightened scenes (it now runs 2 hours 24 minutes, 19 minutes shorter than the Cannes version). 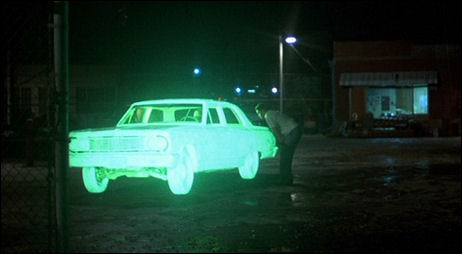 “The major casualty, lopped off at the studio’s urging, was a subplot with Janeane Garofalo as a general,” Lim writes. Kelly also rerecorded costar Justin Timberlake‘s voice-over so it would sound less sarcastic and more like Martin Sheen‘s narration in Apocalypse Now.

“Kelly’s new cut may be easier to follow,” Lim writes, “but he has not altered the movie’s kaleidoscopic structure or diluted its psychedelic nature. In other words, it’s still far from commercial.”

As I wrote a year and a half ago, “Reservations aside, this is one of those films you have to see just to see how much you can get on the first take. I’m definitely going to take Kelly’s advice and see it a second time.” I’m seeing the new cut this evening, in fact.