Last Friday night Tower Heist director and Oscar show producer Brett Ratner stepped into some p.c. poop, and he’s now trying to wash it off with one of those “whoops!…didn’t mean it that way” apologies. TheWrap‘s Sharon Waxman is reporting that when Ratner was asked by an audience member if he had rehearsed his cast, he replied that “rehearsal’s for fags.” 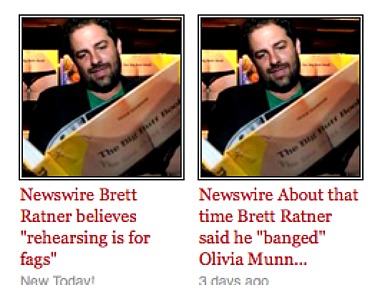 Ratner meant, of course, that rehearsal was for candy-asses, and that real men just get out there and hit their marks and say their lines, etc. But he wasn’t smart enough to say “candy-asses” and that’s why he’ll be in trouble for the next 24 to 72 hours. Because he indicated that his mindset and vocabulary are rooted on some level in the mid 20th Century homophobia alluded to Boys in the Band. (Ratner was born in ’69, a year after the play opened and a year before William Friedkin‘s film was released).

This is the same kind of thing that got Vince Vaughn in trouble when his character in The Dilemma said that energy efficient cars were “gay…not homosexual gay, but parents chaperoning your high school dance gay.” He meant that they weren’t maverick enough, that they were too obedient and kowtowing to the p.c. norm, that they lacked that studly, stand-alone Steve McQueen muscle-car aura. But he was also indicating that “gay” meant wispy and fluttery.