“Show Me The Mummy”, posted on 3.20.17: “The Mummy has seemed like a fairly silly film from the get-go, and now those chickens are coming home to roost with talk swirling around that ‘people are laughing at it‘ and that a recent test screening (which may or may not have happened in Glendale on March 8th) drew lousy numbers and that it may not be quite good enough to launch a Universal monsters franchise a la Marvel universe. 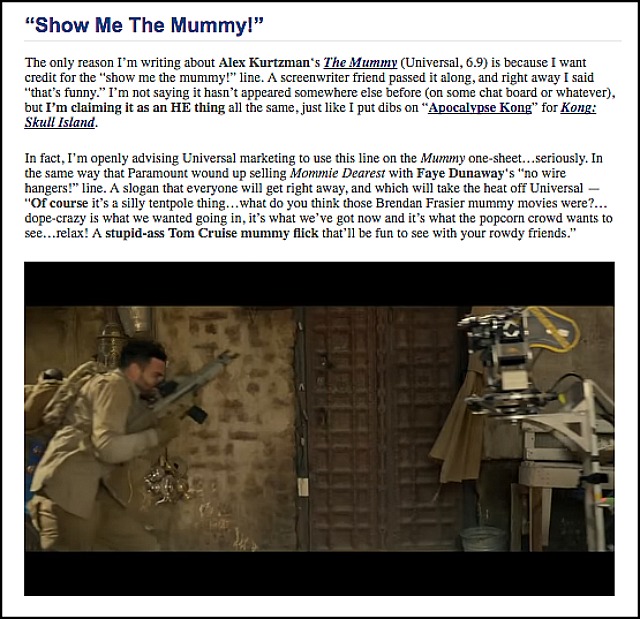 “That’s what the basic game plan is — to use the presumed success of The Mummy to generate excitement in a reboot of several classic Universal monster films — ‘a whole new world of gods and monsters’ or words to that effect. That said, has anyone ever expected The Mummy to be anything more than a super-expensive piece of CG goofery? No. Was anyone taking it seriously when they made it? How could they? That Mummy trailer that popped last December makes it look like a satire of an absurdly expensive meta monster flick.

“This is all loose talk, of course. Nobody knows anything, least of all myself. And you always need to take a few steps back when it comes to second-hand sources.

“A screenwriter friend knows a guy who’s fairly close to The Mummy, and he’s hearing that the Glendale numbers weren’t good and that Universal execs are worried about the film’s commercial potential and that Cruise is distressed and that nobody wants to be part of ‘a shitty, hugely expensive, giantly over-budgeted movie,’ and that the most recent cut of The Mummy was screened last Friday for Universal brass.

“There also seems to be some concern (emphasis on the ‘s’ word) about whether audiences will be laughing ‘with’ The Mummy or ‘at’ it.

Another screenwriter friend who hears stuff claims ‘they were laughing at it like people did at Van Helsing, and that Cruise was being so stoic and fighting CGI crap and was too old for this silliness. And, of course, somebody yelled out ‘show me the mummy!’”