Last week a disparate community of tough female film critics and outraged femme-nazi types (Mary Sue, Jezebel) were howling about David Edelstein‘s 6.1 Wonder Woman review for phrases and terms within the review they felt were leering or sexist. Honestly? They seemed to have a point.

In a mea culpa piece that ran on Tuesday, 6.6, Edelstein said he’d been misunderstood or at the very least tarred and feathered with too hasty a brush. He also admitted to having used imprecise or poorly chosen language. Which imperfect writers occasionally do. 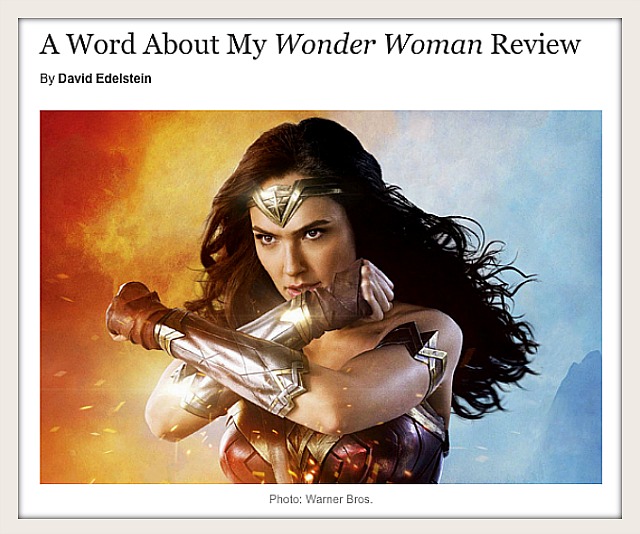 The bottom line is that Wonder Woman was and is a very big deal for women everywhere, and particularly in the wake of its huge financial success ($254 million worldwide thus far), and so anyone throwing shade in a way that sounded even a tad sexist was sure to catch hell. This Edelstein did, and in spades. The harridans didn’t disagree with him or reprimand him for incorrect attitudes or callous phrases — they wanted him seized, dragged into the street and clubbed to death.

Edelstein: “In the context of this spate of comic-book movies (which I consider a blight, but that’s another subject) I underestimated how much a superheroine at the center of a woman-directed film would mean to many people, and descriptions I considered lively and complimentary would come across as demeaning. Moreover, if Wonder Woman will empower women at this moment in history — in which reproductive rights are imperiled, and an admitted groper is working to undo decades of gains for women — then some of the criticisms of my review are just. I reserve the right to think that this is not, overall, a very good movie. But it is an important one.”