Gentlemen: I’m just writing to let you guys know that all the post-production work you sank into getting Sweeney Todd to look and sound just right was ruined today as far as the Boston critics were concerned, and all by some kid in a projection booth and a manager who didn’t care very much. 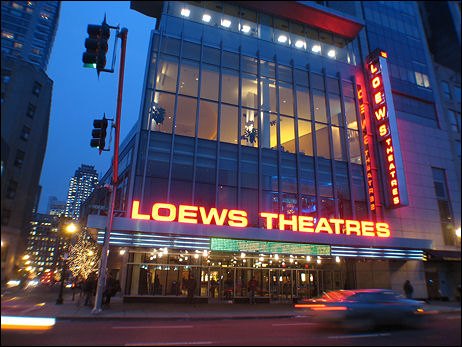 I saw Sweeney Todd last Thursday (11.29) in the big Paramount theatre on the Melrose lot, and it was beautiful…exquisite. It looked and sounded perfect in every way. Needle-sharp focus. Crisp full sound. More than enough projector light (i.e., foot lamberts) so that every last value in your somber-colored, almost black-and- white palette was on the screen.

I saw it again today at a 2 pm critics’ screening at Leows Boston Common 19, and the projection and sound were way below par. The delight that I experienced last Thursday had been reduced by a good 30% or 40%. The focus wasn’t quite 100% at first — I had to go out and complain and ask the projectionist to please improve it. The sound levels were pathetic at first, and even after they turned them up very slightly after I complained there was something odd about the mix — the orchestra seemed to overwhelm the voices.

On top of which the screen was lit with a red-pink glow on the lower right and lower left due to brightly-lit exit signs, which naturally fucked with your delicate gray- black color scheme.

I talked to a couple of critic friends about the lousy projection after the screening; I also spoke to the publicists who were handling it. They all agreed that the Leows Boston Common can be a substandard or at the least problematic place to see films, but what are ya gonna do? As one top critic said, “Welcome to our town.” I know that when I complained about the above issues the manager very faintly grinned during our conversation. Faint grins do not connote hard-core attitudes.

I don’t know how the Boston critics felt about your film (they’re voting this Sunday). Maybe they loved it regardless. But I know I felt much greater enthusiasm for it last week than I did today. It just wasn’t presented with the right oomph & pizazz. The word is “degraded.”