Green Zone‘s “pathological wish to thrill delivers diminishing returns,” writes New Yorker critic Anthony Lane. “It gave better value in the Bourne films, which, for all their low moods, were fired by basic fantasy, whereas the excitements of Green Zone sit uneasily with its examination of the real and recent past. 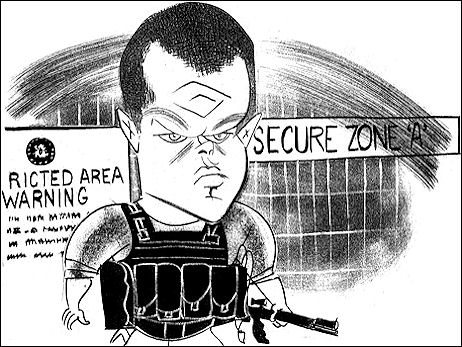 “The credits say that it was inspired by ‘Imperial Life in the Emerald City,’ Rajiv Chandrasekaran‘s nonfictional account of life within — and beyond — the Green Zone, but the book’s task was to unearth a fiasco, its comedy so black and dense that you could pump it out of the ground.

“Many filmmakers would have leaped at the textural contrast between life on the street and the sheen of unreality inside what Chandrasekaran calls Baghdad’s Little America, but Greengrass is too caught up in the hero’s quest to notice.

“The fact that Green Zone begins with a bombing raid should come as no surprise. Greengrass made two of the Bourne films and United 93, and his attitude to the average viewer remains that of a salad spinner toward a lettuce leaf. You don’t so much watch a Greengrass film as cling on tight and pray.

“The zone of the title is the enclave from within which the Coalition Provisional Authority tried to govern Iraq after the war, in 2003, and our hero is Chief Warrant Officer Roy Miller (Matt Damon). Boy, is he a hero: fit, pensive, rough when required, and so unceasingly moral that, on entering the hotel room of a blond, unaccompanied American reporter named Lawrie Dayne (Amy Ryan), he engages her in a constructive discussion of journalistic sources and then — I can still hardly believe this — he leaves. No shock, no awe, no combat-calming sex. All he wants is truth.

“Miller heads a unit that, in the wake of the invasion, is told to seek out weapons of mass destruction; with hindsight, we realize that he might have had more success looking for live unicorns, but there you go.

“What lends the film its grip and its haste is also what makes it unsatisfactory, since the end result of Miller’s hectic hunt is to ‘solve’ the puzzle of W.M.D. ‘If you pull this off, you might just save the country,” a CIA agent (Brendan Gleeson) tells him, but that is a fantasy more lurid than anything in the Bourne franchise.

“One of the charges against the Bush Administration was that it sought to encase Iraq in a narrative far too naive and restrictive for any nation to bear; and, in its small way, Green Zone, a left-wing movie that looks and sounds like a right-wing one, suffers from the same delusion. The story of American involvement, in the eyes of this film, is neither a monstrous folly nor a patient, difficult path to democratic peace. It’s a wrap.”