Given persistent speculation about the Coen brothers’ Burn After Reading being destined to play at the 2008 Toronto Film Festival (9.4 to 9.13), it comes as no surprise that it’s now been chosen to open the 65th Venice Film Festival on 8.27. It’s a standard tactic for fall films with a modicum of class to do the old Lido-Toronto two-step prior to their commercial debut. Focus Features will open Burn stateside on 9.12. It will preem in the U.K. on 9.5. 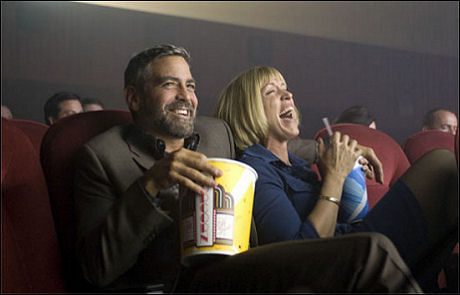 When is Focus going to release a decent assortment of stills from Burn After Reading? I’m getting sick of looking at this popcorn still over and over.

The third film in George Clooney‘s “idiot trilogy” (following his turns in the Coen’s O Brother, Where Art Thou? and Intolerable Cruelty), Burn After Reading, which the Coens wrote and directed, is about a couple of Washington, D.C. gym employees trying to shake down an ousted CIA official (John Malkovich) after they find a disc containing his inside-the-agency memoir.
I forget who plays the gym employees (read the script a long time ago and I wasn’t sure even then), but the costars are Brad Pitt, Frances McDormand, Tilda Swinton and Richard Jenkins.
Burn is a Working Title production, produced by Joel and Ethan and executive-produced by Working Title’s Tim Bevan, Eric Fellner and Robert Graf.