“I remember there was a reception given for [Richard] Wagner‘s daughter-in-law,” Mrs. Bertholt begins. “Hitler was there. Ernst Janning was there with his wife. She was very beautiful…very small, very delicate. She’s dead now. 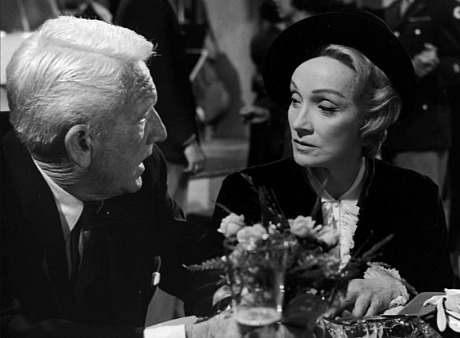 “Hitler was quite taken with her. He made advances towards her during the reception. He used to do things like that in a burst of emotion. I will never forget the way Ernst Janning cut him down. I don’t think anybody ever did it to him quite that way. He said, ‘Chancellor…I do not object so much that you are so ill-mannered. I do not object to that so much. I object that you are such a bourgeois.’ Hitler whitened, stared at Janning, and walked out.”

From 12.21 Kevin Sessums post on Facebook: “I was talking to a friend the other night here in New York. She was married for a while to an industrialist with a high social profile in Manhattan, so for much of her marriage she played hostess for parties and dinners at their townhouse and out at their summer estate. We got to talking about the election and how she was coping.

“‘What boggles my mind,’ she said, recalling that marriage and those years of playing New York hostess, ‘is that during all those years the only person I ever insisted on banning from our dinners and our parties — indeed, our very house — was Donald Trump. I just couldn’t put up with his vulgar behavior anymore and you know I don’t have a problem with vulgarity really. But his vulgarity was on a whole other level. The boorish way he groped women at parties and at dinners. He’d even do that thing with me where he’d put an arm around my back and then reach over on the other side to get a feel of my breast. It happened over and over.

“‘I told my husband I would not be felt up by Donald Trump again and other female guests had been complaining to me about him as well. For a time, I just put him next to any C-list or D-list person that might happen to be at a dinner party. [But] there are not enough letters in the alphabet to describe what list he is on. I just can’t believe that the one man I banned from my own house is now taking up residence in The White House. America. That’s America now.”

December 24, 2016by Jeffrey Wells14 Comments
« Previous post
Will Fassbender Get Tom Skerrited?
Next post »
What The Hell Is Tom Hardy Doing?