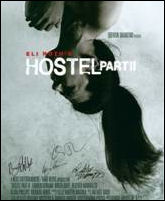 Because of the success of Eli Roth‘s earlier Hostel, movies showing attractive youths being put through through agonizing torture prior to being killed is now considered shruggingly de rigeur, and with the release of Hostel, Part II two days from now, I’m wondering if there’s a line of any kind out there, or whether we’ve passed in a moral-spiritual realm in which lines have basically ceased to exist.
Hostel was about torturing guys, but something darker and more primal is being tapped into, it seems, with Hostel, Part II‘s focus on young female victims. Is there any way to say that these scenes aren’t driven by rage currents dwelling inside Roth and his fans, and is it unfair to call these currents sociopathic on some level? The standard assessment is that some kind of metaphorical sexual release factor has been provided by bloody slasher films all along (which is why they’ve always been big with the young date crowd). I doubt if torture porn flicks would make money if they weren’t sexually arousing on some level, but I shudder when I ask myself why certain guys get stiffies over this stuff.
Young women have been getting killed in horrific and grotesque ways since the beginning of the predator-slasher flicks (starting with John Carpenter‘s Halloween) in the late ’70s, and Roth knows he has to raise the bar or risk being dismissed and waved off by genre aficionados. But what are these films really about? And what do they say about the fans who go to them time and again? I know there are some readers who will think me old-school and fuddy-duddyish for asking this, but is there anything that viewers won’t stand for? 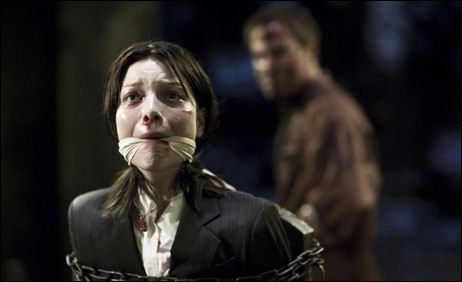 One line that will never be crossed is dog torture. If Roth were to show any howling canine getting hung upside down and slowly cut to death and then disemboweled, his career would come to a screeching halt. I don’t know about cats. I used to know guys in my pre-pubescent youth who would half-chuckle at the idea of swinging a cat around by its tail and slamming it into a wall.
A few days ago Film Ick‘s Brendon Connelly slammed Deadline Hollywood Daily‘s Nikki Finke over Finke’s calling Roth’s Hostel, Part II as “disgusting” without Finke (apparently) having seen it.
And now David Poland has admitted having watched a bootleg DVD of Hostel, Part II, and has recoiled big-time, slamming Roth for his depraved-puppy wallowings and saying he’d avoid shaking his hand should he happen to run into him.
He calls the Heather Matrazzo torture scene (n which she’s “hung upside down, naked, bound and gagged) ” the most disgusting, degrading, misogynistic, soulless shit I have ever seen in a movie that is going to be released widely in this country.”
He describes the scene thusly: “A beautiful European woman comes in, disrobes, lays in [a bathtub below the victim], and starts toying with the screaming Matarazzo with a long-handled sickle. She starts to draw blood and also starts getting off on it. She eventually removes the gag so Matarazzo can beg more pathetically and then cuts her throat, bathing and luxuriating in the blood as it pores over here. 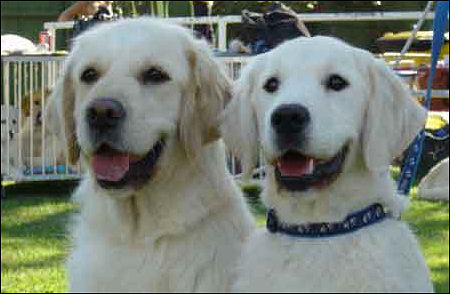 “At that moment, for me, this was no longer just about a stupid, masturbatory, poorly directed shit piece of horror porn. Eli Roth became a little less human to me. He hung an actress, however willing, upside down and naked, gagged and bound, screaming, as nothing but a piece of objectified meat as Roth’s camera moves her breasts in and out of frame like some sort of sick porn tease.
“This is not the first time a director has done something horrible to an actress, but as the scene dragged on, I felt as though I was watching Ms. Matarazzo being raped on a spiritual level. This director did not identify with her as a human in the scene — she is just the target for a bloody gag.
“And then, like the truly sick punk he is, he made a woman do the dirty work in the scene. All said and done, the only person in the film who actually ends up sexually gratified by torture is a woman. There are others who seem to be going there. But this is the one fully executed torture/murder in the film. And just for fun, the woman gets to be naked too.
“I never did respect Roth’s work,” Poland concludes. “Now, if he and I crossed paths, I would refuse to shake his hand. I would extinguish the fire if he was burning, using something quicker than urine, but I’m not sure that I wouldn’t consider it karmic payback for him.”