God, this sounds delicious! A restored 4K version of Dr. Strangelove: Or How I Learned to Stop Worrying and Love the Bomb will be digitally projected at Landmark’s new complex at L.A.’s Westside Pavilion, beginning on Friday, 6.15. There are few things more beautiful to the naked movieoing eye than exquisite, scratch-free, razor-sharp monochrome films, especially those from the ’50s and early ’60s when black-and-white delivered its greatest visual splendor. Technologically, I mean. 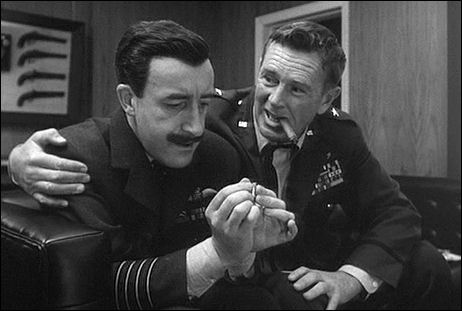 Sony’s restoration guy Grover Crisp has told the Hollywood Reporter‘s Carolyn Giardina that the 4K Strangelove will be “the closest you can get with current technology to showing the film as if you are seeing it in 1964 right off the camera neg.”
Giardina’s piece explains that 4K resolution contains four times more picture information than 2K, the standard for digital cinema, and that Sony is the only manufacturer that offers theaters a 4K projection system. Crisp said that 4K restoration work is being planned for such additional classics as From Here to Eternity and Easy Rider. Hey, what about Otto Preminger’s Anatomy of a Murder?