Gray-haired, jowly-faced Robert De Niro will portray “Ben,” a character based on hotshot producer Art Linson, in What Just Happened?, a Warner Bros. release that will begin filming under director Barry Levinson in March. 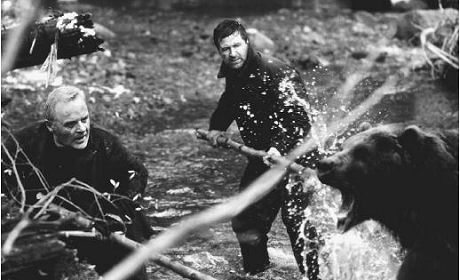 The title and story are taken from Linson’s 2002 book, which is largely about the making of The Edge. The 1997 drama was a pretty good, moderately well- received film about a grizzly bear looking to hunt down and eat three guys — a multi-millionaire (Anthony Hopkins), a younger man who’s been sleeping with the rich guy’s wife (Alec Baldwin), and a not-very-smart black dude (Harold Perrineau) — who are lost and stranded in the Alaskan wilderness. Linson produced and David Mamet wrote the script.
Please, please, God…don’t let this movie turn into another jaunty lightweight fizzle, which, sorry to say, is pretty much what Levinson has been specializing in over the least few years, post-Liberty Heights. Look at the sheet…Man of the Year, Envy, Bandits, An Everlasting Piece. Please, please let this be another Wag the Dog or, better yet, a Hollywood-style Tin Men.
The Production Weekly blurb says De Niro will play a Linson-like producer who is going through two weeks of hell as he tries to get a picture made, hanging on to the tattered threads of his career as he tries to maintain his dignity while surviving the mounting humiliations of Hollywood.”
Sean Penn is expected to play himself, the Production Weekly report says.