London Is Okay But…

David Ayer‘s Fury will close the BFI London Film Festival on Sunday, October 19th, or two days after it opens stateside. Two weeks ago Sony declared they consider Fury an award-season contender, but if they wanted a real-deal conversation starter they would have arranged for a surprise screening during the forthcoming 52nd New York Film Festival. Alas, the film wasn’t ready to be screened for the NYFF committee in time (or so I’ve been told). The London Film Festival slot is a promotional bounce for the 10.24 British opening plus a nod to the fact that Fury shot in England for three months last year. HE to Fury producers: You’re going to have to do better than this if you want the Oscar-blogging mafia to really sit up and go, “Yes!…definitely hot shit…looking forward and then some!” I obviously know nothing about the quality of Fury. For all I know it’s Saving Private Ryan meets Full Metal Jacket. But you have to roll it out in the right way or people will mutter to themselves, “Well, if their energy levels are only at a level 7 or 7.5, why should we raise ours any higher?” 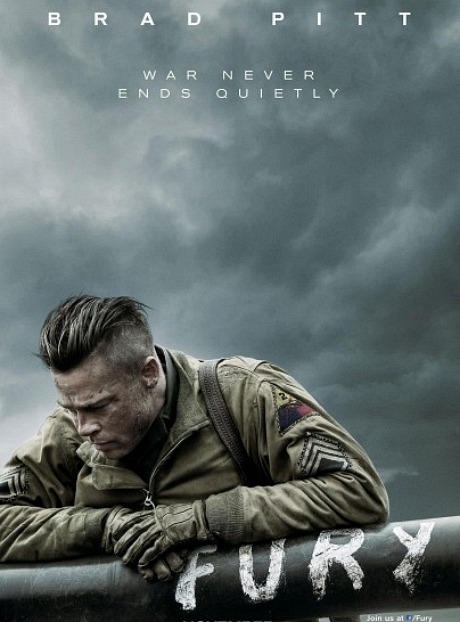 I’m not trying to be an asshole here. Sony started the awards-contender chatter, not me. If they just wanted to position Fury as a commercial actioner (i.e., a rugged war flick aimed at guys) with an expectation of strong reviews, fine. But that Cieply article started something. When you say “okay, award-conversation starters…pay attention to this” and “let us in, wee-yoo,” you’re jumping into a game that has certain rules and regulations.