Because it popped on 5.10, or just as the Cannes Film Festival was getting underway, I ignored Criterion’s Bluray of Nicholas Ray‘s In A Lonely Place (’50). Last night I finally caught up with it. I had never thought of this downish Hollywood romance as anything special to look at, but now, thanks to Criterion, I’ve got a new attitude. The crisp black-and-white imagery is luscious and rich like a river…a river of glistening silver. It’s strawberry shortcake with whipped cream. The mine-shaft blacks are to die for. I was sitting up in my seat and going “whoa, wait a minute…this is excellent!” 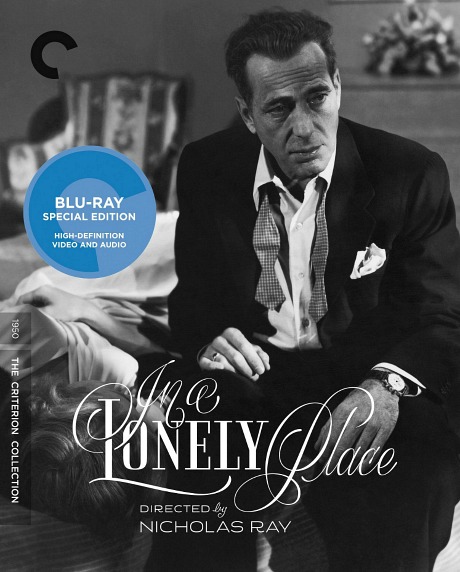 Criterion Bluray of Nicholas Ray’s In A Lonely Place.

A lot of times Criterion will make a classic film look darker or grainier than it should be. (The Only Angels Have Wings debacle is one example.) But every now and and then they’ll make a film look much better than ever before. This is one of those times.

Wiki boilerplate: “Humprhey Bogart stars as Dixon Steele, a troubled screenwriter suspected of murder and Gloria Grahame co-stars as Laurel Gray, a neighbor who falls under his spell. Beyond its surface plot of confused identity and tormented love, the story is a mordant comment on Hollywood mores and the pitfalls of celebrity and near-celebrity, similar to two other American films released that same year — Billy Wilder‘s Sunset Boulevard and Joseph Mankiewicz‘s All About Eve.”

Ray and Grahame were unhappily married during the making of In A Lonely Place. They were separated during much of principal photography. Most of their marriage was off and on. They later reconciled and stayed together until divorcing in 1952. The incident that tore it, of course, was Ray finding Grahame in bed with his thirteen-year-old son, Tony. Can you imagine what that must been like for the kid? Every now and then I’ll use a pet phrase: “The sex was so good that I cried.” Tony Ray was probably weeping for days.